RB1 couverture is pretty in pink 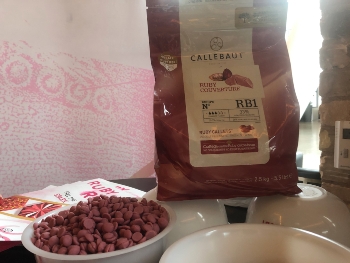 On July 16, 2019,Callebaut launched their long-awaited Ruby confection in Canada. Sold as a couverture due to its cacao content, the pink hue and slightly tart, fruity taste was showcased in a wide variety of pastry, chocolates and bonbons at the event.

To date, the product is not allowed to be called “chocolate” since it does not have a standard of identity for this new category yet. Currently, there are three categories of chocolate, and Ruby is the latest.

To obtain a U.S. standard of identity for the breakthrough innovation, Barry Callebaut is working closely with the FDA and CFIA to begin test marketing ruby as a new chocolate product in the U.S., with the ultimate goal of establishing a new standard of identity reflecting ruby’s distinctive sensory profile. In the meantime, ruby will be launched in the U.S. and Canada as ruby couverture.

Chocolatier Daniel Stubbe unveiled its Jewel bonbon, an indigo truffle streaked with Ruby and filled with a layer of Ruby couverture ganache and a drop of lemon ganache with cacao nibs. Stubbe Chocolate also revealed its elegant snack, a take on chocolate-covered granola bars. The pink bars made with RB1 were embedded with granola made with chia seeds, sunflower seeds, almonds and chocolate.

More subtle uses for the pink-hued couverture appeared in croissants, rendering the pastry itself an interesting salmon-colour. Filled with a pineapple and guava filling, they were labelled “gushers” a nod to the fruit candy filled with a soft gummy centre.

Aside from the 90’s candy tribute found in those croissants, the evening also featured nostalgia in the form of pastry chef Cori Osborne’s Lunettes de Romans cookie, two sables filled with a crémeux made with RB1 and a pâte de fruits centre. The cookie was inspired by chef Osborne’s favourite childhood cookie, the Peek Frean Fruit Cremes.

The room was busy with chocolate and pastry lovers who were intrigued by the pastel hue of the chocolate and its sour, fruity backtaste. Four Seasons Head Pastry Chef Steven Tran was inspired  by the confection’s fruity palette, and incorporated it into his cherry pistachio pastries.

The colour was not a deterrent to chefs; creativity and discipline was demonstrated in both the application and the variety of uses for Ruby couverture. Bakers Journal is eager to see what the future will bring with more exposure to RB1.