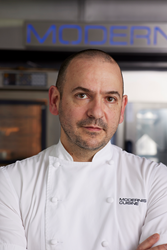 The Barry Callebaut Group, manufacturer of high-quality chocolate and cocoa products, together with its brand Cacao Barry, announced Chef Francisco Migoya, USA Cacao Barry Ambassador, as the lead chef for cocoa farming sustainability in support of the Cocoa Horizons Foundation, an impact driven program focused on cocoa farmers prosperity and helping to build self-sustaining farming communities that protect nature and children. He will be a champion for sustainable cocoa practices and work with Cacao Barry and the Cocoa Horizons Foundation to educate chefs and continue raising awareness on sustainability throughout the cocoa industry worldwide.

Chef Francisco Migoya, head chef at Modernist realized his passion for the kitchen at the age of 16, has spent his career dedicated to the world of sweets, and is recognized as one of the top pastry chefs in the country. In 2016 he was exposed to the realities of unsustainable cocoa production, such as deforestation and child labour, while visiting cocoa plantations in Peru with Cacao Barry. Since then, he’s been committed to positively impacting cocoa growers. He fully supports the mission of the Cocoa Horizons Foundation and its goals to eradicate child labor, lift cocoa farmers out of poverty, eliminate deforestation, and become carbon positive by 2025.

“Being a Cacao Barry Ambassador not only means enthusiastically supporting the high-quality chocolates that I’ve used for years, but being part of something bigger through the Cocoa Horizons partnership, with an emphasis on promoting sustainable practices,” said Chef Migoya, in a statement. “It’s breathtaking how much progress the Cocoa Horizons Foundation has made, and even more so how much work still needs to be done. I’m honoured to be a part of this organization and the initiative to create a 100 per cent sustainable cocoa industry.”

Cacao Barry shared that it has already met its goal of sourcing 100 per cent sustainable cocoa this year and, with Chef Migoya’s commitment, will continue to create impact through the Cocoa Horizons Foundation, a non-profit organization that focuses on improving the livelihoods of cocoa farmers and their communities. The foundation promotes sustainable, entrepreneurial farming, improved productivity, and community development. By actively supporting the Cocoa Horizons Foundation, Cacao Barry and the Barry Callebaut Group are committed to creating sustainable chocolate that future generations can enjoy with regard for the environment and farming communities that the chocolate is sourced from.

The Cocoa Horizons Foundation’s push for sustainability in the cocoa industry has never been more important as it is estimated that 60 per cent of cocoa farmers in West Africa are living in extreme poverty. As a direct result of cocoa farmer poverty, it is estimated that more than 1.5 million children are working on cocoa farms in Côte d’Ivoire and Ghana alone. Additionally, deforestation is a major contributor to climate change; Climate change also threatens the ecosystems on which cocoa farmers depend. Among these areas, the Cocoa Horizons Foundation is focused on driving impact in productivity, community, and other environment causes to drive meaningful change in cocoa farming communities.