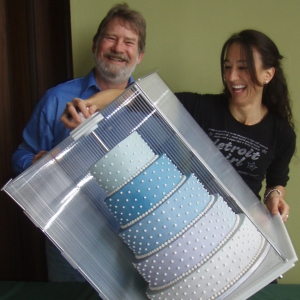 Previously employed as an engineer, Chapin found himself unemployed due to corporate downsizing. With three children to support, he took the plunge into entrepreneurial waters and start making CakeSafes and selling them to bakers commercially.

Chapin was nominated for the 2018 American Business Awards in March of this year. In May, CakeSafe was notified that the home-based business had won the Silver Award for Product Developer of the Year. Chapin reports that he is thrilled to have won, but is more touched that his employees thought he deserved the award enough to nominate him.

The judging and deliberation took two months. Some of the judges comments on the nomination read “this is an engineering feat,” and “excellent entry. Deserves to be awarded.”

Since CakeSafe LLC’s founding in 2009, the company has grown an average of 40 per cent per year. The business started as a solo operation and now currently employs 6 people. Chapin invents new products to make bakers’ lives easier almost every year.

In 2017 Chapin invented the CupCakeSafe as a solution for bakers who deliver cupcakes. He also designed and created the Xtend-A-Turntable to make the working surface of a 30.5 cm turntable larger, and he redesigned the Spray Booth (a product to remove overspray from the air) to be more durable.