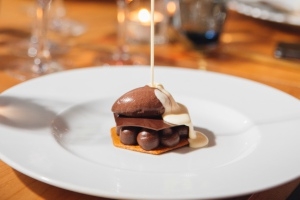 On Tuesday, April 17, Cacao Barry invited 12 chefs to use cacao and chocolate in innovative ways.

The event was held at the Bacchanal, a Toronto French-style bistro. The mission of the dinner was to showcase cacao as a savoury ingredient in main dishes. All of the chefs revealed innovative uses for Cacao Barry’s various chocolate and powdered cacao.

The first course of poached lobster in white chocolate sauce made of Zéphyr white chocolate, was served with a star anise flan. The white chocolate complemented the fish without being overly sweet, and give the dish and smooth and creamy mouthfeel.

An inventive use of 76 per cent origin dark chocolate was found in the second course, the Agnolotti. The pasta itself included the cocoa, promising a strong, heady smell of chocolate, but revealed the dark, roasted flavour that was well off-set by the slightly salty beet filling. The dish played with the senses: The nose smelled chocolate and expected sweetness, but the tongue registered roasted beets, and lightly salted pasta, covered in a poppy seed butter.

The chefs found a range of ways to incorporate cocoa and chocolate into anything that was not dessert, hoping to inspire future trends where cocoa can be more than a staple in a pastry chef’s pantry.

Of course, it would not be a Cacao Barry Flavour Dinner without a lavish finish to a decadent meal. Two separate desserts, one featuring dark chocolate and another showing off the same white Zéphyr brand of chocolate that was originally paired with seafood.

The buckwheat financier cake was dark, and made good use of the bitter bite of 75 per cent Tanzanie chocolate. It’s bitterness complemented the Crème Anglais nicely. The white chocolate coating on the goat yogurt parfait offset the tanginess of the yogurt, and the pine nuts’ pleasant crunch complemented the smoothness of the rhubarb compote.

The event showcased the various applications of a variety of cocoa products. The presentations were imaginative, and should inspire chefs to play with the cocoa for more than dessert.