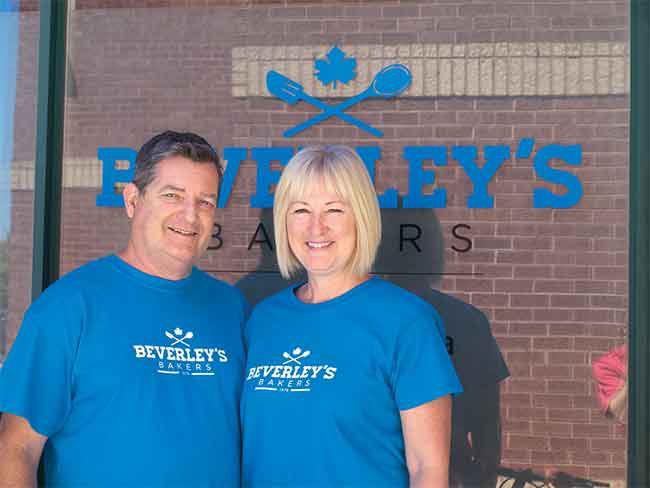 The butter tart is a Canadian classic, from school bake sales to family gatherings coast-to-coast, we’ve all grown up knowing the gooey sugary goodness inside that crumbly pastry shell. Focused on rekindling memories of the best home made tart experiences, Darlene Carlton, co-owner of Beverley’s Bakers in Stouffville, Ont., has one clear objective for her business: “I want to be number one for handmade homestyle butter tarts.”

Together Darlene and her husband Gary are embarking on a journey to reintroduce a successful butter tart recipe to the market, building their brand and taking the country by storm.

The history of the butter tart has been traced to 16th Century England when commoners would make treacle tarts from syrup and stale bread. In Canada the first recipe book mentions date back to the early 1900s where, like today, the tarts were made from simple farm house ingredients: butter, eggs, sugar, flour and lard.

The Beverley’s butter tarts story begins in 1976, when Beverley Max of Toronto started selling her homemade butter tarts to customers at her husband Bob’s pool hall. Before long butter tart sales overtook the operation, and soon Beverley and Bob were running a wholesale baking business delivering direct to local shops.

Sensing a greater market opportunity for these handmade treats, in 1989 Tony Ciufo became involved in acquiring the butter tart business. Ciufo leveraged his history in the food brokerage business to expand the brand’s reach. “We took the show on the road,” says Ciufo, explaining that through partnering with distributors in 12 months they almost tripled the butter tart sales. “There was nothing else like them on the market at the time,” he says.

Ciufo coined the term homestyle to describe the tarts. Over the next decade they were able to more than triple the business again with sales across the country.

In 2000 the Beverley’s business was sold and folded into another dessert wholesaling company, and over time the brand disappeared from the market.

After more than a decade, Ciufo felt it was time to resurrect the Beverley’s brand. “We saw a void in the marketplace for a good homestyle butter tart,” he says. “There are pressed tarts out there, but we figured there could be room for growth.”

That’s when the Carltons jumped in to take on the challenge. Darlene and Gary don’t have a history in the baking industry, but they understand a good business opportunity. With Ciufo’s assistance, in 2013 they resurrected the Beverley’s name, reconstituted the recipe and re-introduced the hand made tart production process.

Darlene brings a business administration background and handles the front office, while Gary, with years of experience in operations, oversees all aspects of production.

The duo acquired an industrial unit northeast of Toronto in Stouffville and set up shop. A true family operation, their daughter and son-in-law together handle the branding. They’re responsible for the very Canadiana logo, with the maple leaf and crossing of the spatula and spoon that resemble canoe paddles at a glance.

Branding was of utmost importance, says Darlene, and establishing a strong identity was the starting point. “If we could be known by that; that would be fantastic,” she says.

There are competitors in the homestyle butter tart business, yet most major grocery chains still stock industrial pressed butter tarts in their bakery sections, notes Ciufo, who is working with the Carltons to move their business forward. The Beverley’s brand and the original recipe appeal to the clean label and artisan trends in the market. The imperfect handmade touch is the signature. “It feels good to be able to be part of something that was original,” says Darlene.

Of course that comes at a premium. “We do make a larger tart,” she says, adding that pricing for Beverley’s is a little bit more, and that’s part of the education they have to deliver to distributors and retailers.

Since being immersed in the butter tart culture, Darlene has discovered a passionate crowd. “People will go out and source their favourite butter tarts,” she says. “They may not want one every day, but when they want one they want a really good one.”

The Carltons have been encouraged by their early success. Participating in the annual Butter Tart Festival in Midland, Ont. in early June, they arrived with over 14,400 butter tarts. “We couldn’t hand them out to the people fast enough,” says Gary.

“We sold out in five hours,” adds Darlene. “We still had another four hours to go.”

The event led to email inquiries afterwards, and that’s exactly what they were after. As a wholesaler, they’re using these promotional branding exercises to build consumer awareness and ultimately retailer demand.

As the appetite for Beverley’s butter tarts grows, production must also increase. The company’s staff has swelled from four to 10. Gary works on the floor every morning, and every piece of used bakery equipment he’s purchased has been stripped down and rebuilt. Besides the mechanics of the operation, he’s also learned to appreciate the baking challenges.

“I think a butter tart is one of the hardest things to bake,” he says. “You have to keep an eye on the tarts, but you can’t tell how well it will set until it cools down. And by then it’s too late.”

A finished Beverley’s tart will flow, but it’s not too runny or too solid. And according to Gary it’s sweet without being too sugary. “We used to have more of a sugar aftertaste. Now, after you eat the tart you get a caramel-like taste.” He also describes the tart shell as more of a flaky pie dough crust with a great shelf stability.

Perfecting the recipe has been an ongoing process. Darlene recalls a receiving valuable feedback when approaching a nation-wide coffee store chain to carry the Beverley’s tart. “It was just a matter of cutting back on one of the ingredients to make the tarts less runny, which actually helped us in the long run. It taught us we have to listen to the customer.”

They made the change, and they got the account.

To begin scaling up production, Beverley’s recently replaced an old tabletop pastry sheeter with a standalone model, delivering more consistent thickness, reducing their waste from about 20 per cent to zero and eliminating kneading the dough by hand, relieving stress on the employees’ wrists and arms. “Providing a good atmosphere for our employees is very important,” says Darlene. “They’re the front line.”

According to Gary, those improvements alone have led to about a 30 per cent boost in efficiency, and the addition of a cutting wheel on the roller to eliminate hand stamping will further streamline the operation.

“You have to spend money to make money. In fact by spending money we’re actually saving money,” says Gary. “It’s taken us two years to get to this point where we’re all set up and ready to go.”

He feels that with three more bodies they could triple production in a day. The bottlenecks are the hand work of pressing shells into the pans, filling and packaging.

Based on the size of their existing unit, Gary estimates they could probably quadruple their business before having to look for a larger space.

The push now is transitioning from delivering their products themselves to aligning the business with larger distribution networks. The goal is also to extend the business beyond Ontario. “We will go national for sure,” says a confident Darlene.

For now Beverley’s Bakers produces a base selection of tarts including plain, pecan, walnut, and raisin butter tarts, as well as premium tarts including raspberry coconut. They’ve also developed what they call ‘the Bomb’. “We put a quality cocoa right into the pastry, and we add chocolate into the filling,” explains Darlene. “It’s not as sweet as you might imagine because we use a dark chocolate. It cuts down on that sweetness. But it’s decadent.”

While the fillings may change, the tart shell is the vessel that can carry anything savory or sweet. Looking forward they’re exploring ideas for more exotic fillings to appeal to ethnic markets across Canada where the classic butter tart isn’t as well known.

But first things first, Beverley’s Bakers immediate goal is getting its original recipe butter tarts into the hands of Canadians, building on a legacy and fulfilling the demand for this classic dessert.