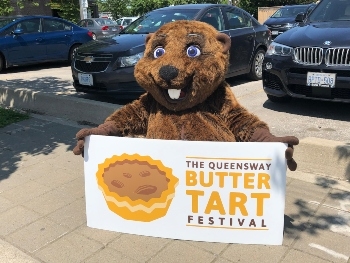 For many small bakeries, competing with grocery stores or large-scale bakeries can be daunting. However, Michele Roberts, the owner of Etobicoke-based Tartistry sees the growing trend in food-oriented tourism as an opportunity to showcase small or burgeoning bakeries, and bring in locals from other parts of the city.

Food festivals have many advantages, aside from fun, and good snacks. They can raise a bakery’s profile and generate income, especially if this creates more clients after the festival is over.

Inspired by the growing popularity of food festivals, Roberts contacted the Queensway Business Improvement Area (BIA) association and was met “with enthusiasm.”

Roberts gave several good reasons why a festival in an urban neighbourhood is a good idea, aside from the “three B’s” of the BIA: beautification, branding and bolstering business.

“As I happen to be in the butter tart business, I have become aware that Canadians are nuts about their butter tarts. They’re crazy about them. The BIA needed a “hook” to get people to come to the festival. Something that would absolutely get their interest and bring them in from near and far. I suggested the Butter Tart festival would accomplish that.”

Despite this being the Queensway BIA’s sixth year in operation, June 22, 2019 marked the first Queensway Butter Tart Festival. “The first thing we did was look at other, well-established butter tart festivals, such as the one that takes place at the beginning of June in Midland, every year. I think it’s been going on now, for seven years. It seems to be the biggest of all. But there are now many sprouting up, now: Paris, Ontario; Burlington; Hamilton; Brooklyn; Bowmanville…I can’t even name all of them. But they’re like little mushrooms popping up all over the place. And it seems that no-one is getting tired of hearing about them and attending them.”

Like any successful venture, the first step lay in doing some groundwork. Roberts did some research on the existing festivals. She reached out to the repeat vendors, and invited the popular ones, personally. To save time, she also emailed the bakeries that intermittently appeared at other festivals, and invited them to join the Queensway Festival.

Instead of being ignored, or creating unwanted competition, the respondents and her local Business Improvement Association responded with enthusiasm. “Everybody wants another butter tart festival to go to. The more the merrier, really.”

To a casual observer, the success of the Queensway’s first butter tart festival might seem like beginner’s luck. However, an enormous amount of work and collaboration with various shareholders went into its delivery. Roberts shares her advice for anyone thinking of launching a food festival.

1.Scope out the competition

You wouldn’t want to schedule your similarly-themed festival for the same date. It would alienate your fellow participants, forcing them to choose. It could also cause conflict with potential sponsors.

They have lots of experience in organizing events, and could have access to details you might not have thought of, such as zoning laws, liquor licenses, noise laws and such. It might sound like a killjoy, but that doesn’t mean you can’t have a live band and a beer tent the location might change. “The city is very stringent on health regulations, safety regulations and so on, as they should be,” states Roberts. “So, you have to imagine yourself at the event and think it through each step of the way. Don’t leave any stone unturned.”

3.Secure the date and time, and get your vendors ready

“When planning it, get down to the nitty-gritty of everything,” advises Roberts. “Close your eyes and imagine each step of the process, whether it be getting permits and licenses for various things.” Roberts strongly advises the use of checklists and spreadsheets to keep timelines and equipment at the ready.

4.Ask for volunteers and expert opinions

Roberts’ recommendation for districts that don’t have BIAs to hire a professional planner. “Take advantage of other peoples experiences,” she recommends. “We do work with some professional event managers. They’re certainly old pros at doing events like this, but they haven’t done a butter tart festival per se, and that’s where we pitched in with some knowledge, having attended and been vendors at some of them.”

5.Price out the cost of tents/booths, park rental and parking

See if you can find a way to get something free or at a reduced rate in exchange for advertising. If not, try splitting costs or ask for a bulk rate (if applicable.) Do your research in advance; a spreadsheet itemizing the cost can help you compare prices. Take note: some merchants or locations might increase the price if your event lands on a holiday.

6.Plan backwards from date of the event to your current timeline

By thinking of what you would need to see on the day of, you can find the timelines for booth rentals, printing of flyers and signage, and any seemingly last minute detail.

8. Focus on the goal of your event

Is it to promote local talent, or sell as many baked goods as possible? If selling is key, make sure that there are plenty of flyers and online promotion as often as possible. Ask each of your vendors what they would need prior to the event.

Send out a survey to guests and vendors to get valuable feedback to enhance your next food festival.

9.Thank you: If swag-bags as a gesture of thanks is out of the question for your event, at least send a sincere, written note of thanks. Anyone can bang out a terse “thanks” online, but there’s something heartfelt about a written note.

Roberts measured the success of the Queensway Butter Tart festival by the “numbers of people in attendance.” She’s asked each vendor how many tarts were sold. “That was a good measure of success.”

Roberts added that she wanted the Queensway Butter Tart Festival to have more attractions than most previous butter tart festivals. “As a result, we had a Kids Zone, a bouncy castle, obstacle course, we had the President’s Choice Super Dogs performing multiple times during the day, we have many bands coming on of various genres to appeal to the young and old and so on. In that sense, it’s something for everyone, not just the hungry butter tart eaters.”

Happy organizing, readers. If Ontario is known for its butter tart festivals, what pastry or baked good would bring tourists your city, town or province?