These Brazilian truffles serve a special cause 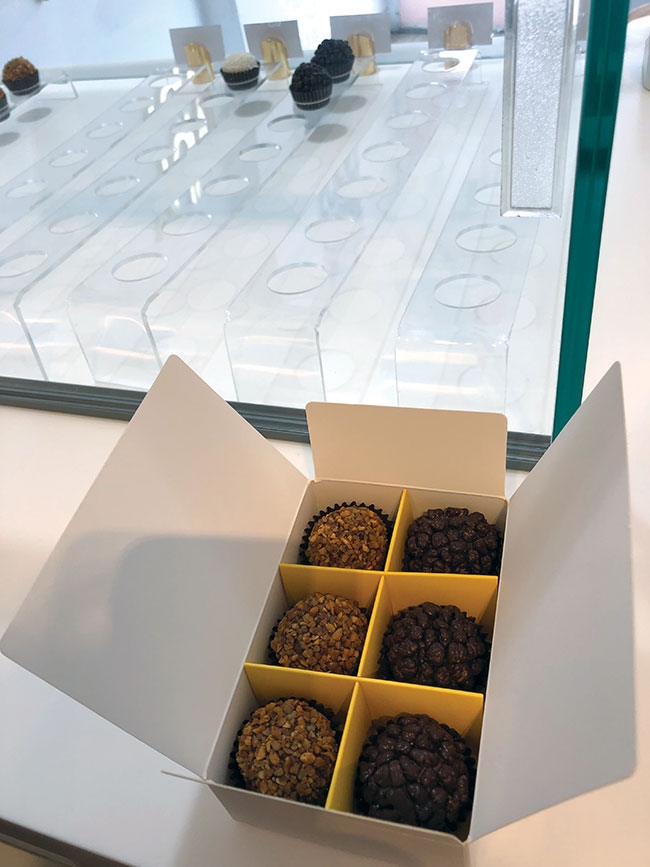 In 1945, a Brazillian brigadier named Eduardo Gomes was the unlikely inspiration for a chocolate trend. Gomes’s Presidential campaign had a grass-roots following: Local women held parties to raise funds for his election, selling homemade chocolates that were somewhere between a chocolate truffle and fudge.

Though Gomes’ bid for the presidency failed, the chocolates known as “brigadieros” were a hit, becoming Brazil’s signature treat. Two Brazillian-Canadians are bringing this chocolate to Canada, and like the brigadeiro’s grassroots history, this shop has a special cause behind it.

Chocollata’s owners Talitha and Igor Ramades’ brigadieros were popular on the pop-up circuit for the last three years. Though they were toying with the notion of quitting their day jobs to make brigadieros full time, they had cold feet at the thought of taking the plunge into entrepreneurial waters.

“What gave us the guts open our store, was our son, who is now 18 months old,” says Talitha. “He was born with Down Syndrome, and once we started research on it, we found that a lot of adults with Down Syndrome have a hard time finding work.”

Despite being trained in brigadiero-making and having the full support of his wife and children, Talitha and Igor had their doubts in leaving their day jobs. “Even though we were thinking about opening the store, we were always so scared,” confessed Talithat and recounted some of her fears: “‘I don’t know if we can do this, you have to pay employees, you have to pay rent, and how much brigadieroes can you sell to make the rent in Toronto?’”

When Theo was born in September of 2018, the Down Syndrome diagnosis was the catalyst for them to build a future for their son. Igor began hunting for a location to become the city’s first Brigadiero chocolatier. Talitha turned to her husband and said, “aside from putting money aside for our son, we can’t really do much for him. If this Brigadiero thing takes off, he’ll always have a job.”

Chocollata is a labour of love in many ways. Aside from making the decision to hire developmentally challenged adults, the couple made the decision to work from their tiny shop on Kingston Avenue, in downtown Toronto. “When we opened our shop, we wanted a space that was very community driven. One of the things we love about the Beaches area is that there are a lot of adults with Down syndrome.”

Aside from their love of handmade chocolate, the pair recognized that Toronto is not widely familiar with the Brazillian treat. “Whenever you go to a party in Brazil, the host has to have these: It’s just not a party without brigadeiros,” says co-owner Igor Ramades.

The location the Ramades’ chose was small fin Talitha’s opinion, but they both like the open kitchen that allowed customers to view the handmade production process. “It’s almost like a piece of art, it’s like a piece of jewellery that you’re putting together.”

“You can have a brigadeiro with any meal, for any occasion,” Igor Ramades adds, “You have to have brigadeiros at weddings. If they’re not there, it’s not a real wedding,” he jokes. “I can’t remember any party in Brazil that didn’t have them.”

The first time they were encouraged to try selling their treats commercial was at farmers markets and flea markets. If the couple were worried that they had a challenge selling chocolates, they didn’t have to worry about its popularity. “The first time we brought our chocolates out at the Trinity Bellwoods flea market – we had only two flavours, coconut and the original – and we sold out,” stated Igor. “We brought 352 units, and we sold 347 in five hours.

Despite Toronto’s love of international foods and chocolate in particular, Igor attributes the popularity of this Brazillian treat to persistence and hard work. He quit his F/X artist job in December 2018, and made the commitment to his family and himself to becoming a full time chocolatier.

The goal of the shop was not only to provide a future for Theo, but also to start hiring adults with Down Syndrome. “We heard that people with Down Syndrome are really gifted in the arts, and brigadieros really are an art.”

Brigaderios are a round, chewy chocolate that the couple decorates with chocolate beads, coconut shavings or in the case of their crème brulée brigadier, crystalized sugar.

The jewel box of a shop was designed by Talitha herself, and the reaction was nearly immediate: Their popularity grew to the point that the shop has since expanded to a new location that will open in spring 2019. The couple will keep the same values that made their Kingston Avenue location popular almost a year ago.

The new shop is scheduled to open in Square One in Mississauga, Ontario. The welcoming teal and pink signature palette and its commitment to hiring adults with Down Syndrome will continue. The Ramades famiy business is spreading sweetness across Ontario.