Features Profiles
Bread By Us 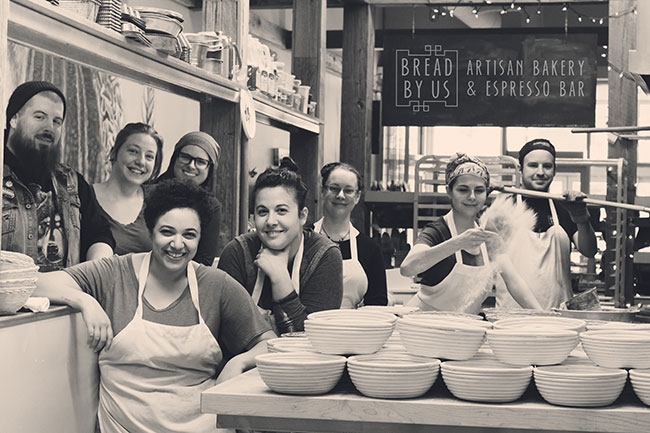 Bread By Us focuses on employee wellness in part by offering health benefits. PHOTO CREDIt: Bread By Us

Bread By Us, an artisan bakery and espresso bar in Ottawa’s Hintonburg neighbourhood, narrowly missed winning the Jake the Baker Award this year. But for co-owner Jessica Carpinone, the result is nothing short of vindication.

In 2011, the former biology student at Carleton University in Ottawa opted for a change of scenery and headed west. She began working at a pizza shop in Vancouver’s Kitsilano neighbourhood called Rocky Mountain Flatbread Co. She was hooked – enough to abandon her dreams of pursuing a career as a scientist.

“I decided to switch gears for the reason most people do: You realize you have a passion for something else,” says Carpinone, now 30.

She enrolled in the baking and pastry arts program at the Pacific Institute of Culinary Arts on Granville Island. After finishing her education there, the Ottawa native enjoyed a stint at Beyond Bread, a Vancouver-based artisan bakery, before heading back east.

“I came away so impressed with Beyond Bread, and I learned so much there,” Carpinone recalls. “I loved everything they were about and I was determined to have a place like that for myself someday.”

Upon returning to Ottawa, she got a job making pastries and baking bread for a restaurant, and in her spare time worked on a business plan for her own bakery. The result, Bread By Us, opened for business in 2013.

“It all happened pretty fast, within just a few years,” she says. “I felt like I could do anything – and that this was the time to do it. I had bundles of energy – much more than I do now! I had a ton of self-confidence, too. In hindsight maybe it was a bit rushed and overly ambitious, but I think you have maybe have to have an inflated sense of ego to open a business. But it’s worked out. So far, so good.”

Carpinone says Bread By Us prides itself on making strictly traditional sourdough breads in limited quantities. That commitment to traditional, artisanal ways isn’t as simple as it sounds, though.

“Our biggest challenge and daily struggle, really, is that Ottawa is considered a young market for artisanal bread,” she explains. “Our bakery is one of just a few very in the area that make traditional sourdough breads. There was a percentage of the population that was ready for it, but over time, you notice that it’s a very different product for some people. They’re not used to the bold crusts and tangy crumb. It’s been a challenge to educate people as to why our bread is made in this style and what the benefits are. It’s not instant bread coming from the freezer to the oven. We make the batch and if we run out, that’s it.”

That’s not all that Bread By Us does differently. “We are in a very café-dense part of Ottawa,” Carpinone says, “but we don’t have Wi-Fi in the café and we do that intentionally for a reason. You won’t see a lineup of laptops in our café and that’s because we want to be a welcoming space where we can get to know people personally. I’d say we know at least half of our customers by name.”

The bakery has also been hosting a series of four-hour workshops – usually one per month – that are open to the public and focus on educating people about sourdough bread and what goes into running a traditional artisanal bread bakery. It’s a mixture of marketing and community service that helped their Jake the Baker Award contest entry stand out from the pack. “People are generally very eager for learning opportunities, and we have the power to facilitate them and simultaneously grow our customer based,” Carpinone says.

Bread By Us also emphasizes commitment to community by paying its full-time employees $15/hour plus health benefits. And it operates on a zero-waste basis, funneling its unsold products to organizations that provide addiction treatment services and support for Ottawa’s indigenous population. Carpinone says the bakery also has a “pay-it-forward”-style program that allows customers to pay for food and beverage items but leave them unconsumed so that needy people can get a free meal when they need it.

“We sometimes lose track,” Carpinone says, “but we have recorded over 2,000 of these interactions in which people were able to walk out of the store with free food or drinks that were pre-purchased anonymously by a previous customer.” Bakers Journal congratulates Carpinone and the entire Bread By Us team for their success in innovation. In this case, biology’s loss is the baking industry’s gain.