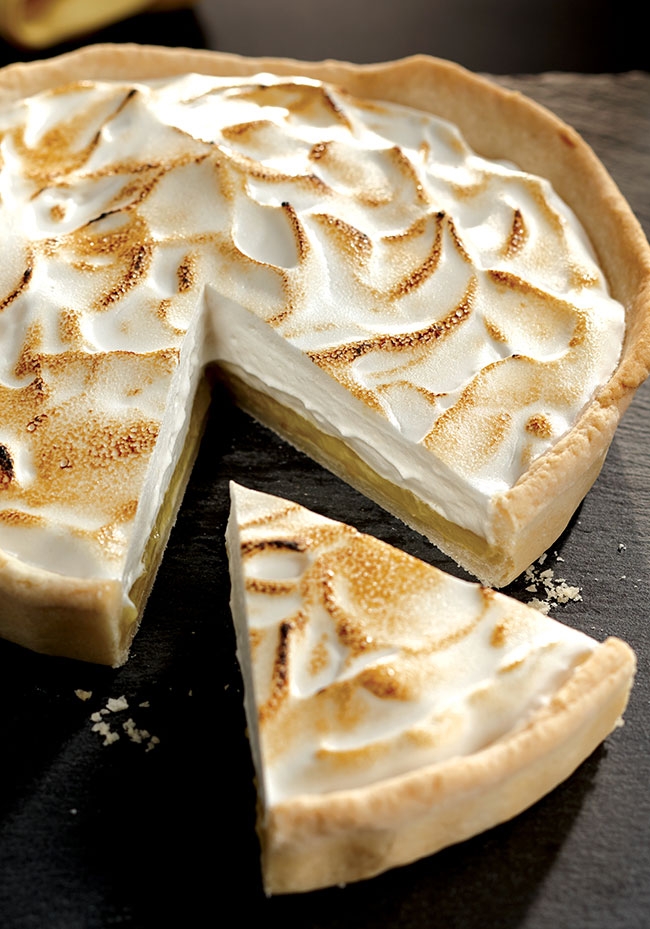 Lemon meringue pie made with aquafaba. Photo by Tango Photography

Aquafaba, the fancy, latinate term for “bean water,” is a cost-effective egg substitute that lends itself well to vegan and allergy-free pastry. Rebecca Coleman, the author of “Aquafabulous! 100 + Egg-Free Vegan Recipes Using Aquafaba,” was first introduced to this versatile ingredient through social media.

Coleman spoke with Bakers Journal to share her experience in cooking with this trendy egg substitute and lend some advice to would-be cookbook writers.

“I really love a challenge,” states Coleman.  “I had a friend named Jen, who had a vegan, gluten-free cake business for while. We’d often be talking about ‘how do we do this?’ and ‘how can we make desserts taste really good, and not use eggs and butter?’ And so, one day, she said, “you’ve got to see this thing! It’s called Aquafaba.”

Coleman was skeptical, to say the least. “Bean water” did not sound appealing to her on its own nor as an inclusion to any bakery mix, but her curiosity got the better of her. “I was like, “come on! Bean water? You’re telling me that bean water is a substitute for eggs?”

“So, one day, I opened up a can of chickpeas, and I took the liqueur from the can and I put it in my mixer, and I added some sugar and a little bit of cream of tartar, and I turned it on. Ten minutes later, I had this beautiful, fluffy meringue…my mind was blown.”

Coleman immediately saw aquafaba’s possible applications in baked goods for people with severe food allergies, or for those with ethical restrictions against eating eggs. Luckily, she is experimental by nature, and saw these exclusions as a chance to flex her skills.

“I don’t have any allergies, so I’m not restricted at all, but a lot of my friends have very significant allergies. They’re celiac, some have dairy allergies, so I’ve always loved the challenge of cooking for my friends, creating food that tastes really good, that is maybe vegan, or gluten-free.”

After creating aquafaba “hundreds of times,” her enthusiasm for this inclusion has not dimmed. Coleman continued to experiment with recipes, and created a list of recipes that worked. A publisher approached Coleman at a food blog conference in Seattle, where it was suggested she write a cookbook.  Coleman was not originally enthused by the notion, but she kept the idea on the backburner.

“He gave me his card and we parted ways, and we had been sort of tossing ideas around, back and forth through email,” recalls Coleman.  “Then one day, I sent the publisher a one-sentence email that said, ‘if you don’t already have a book about aquafaba in the works, you should, because it’s very hot right now, and people are very excited about it.’

“He emailed me back and said, ‘well, why don’t you write it?’” Coleman recalls laughing incredulously at the suggestion. “I could think of many reasons why I shouldn’t write it, but ultimately, I decided to.”

From concept to finished manuscript, the book was created in under a year; considerably faster than the average time frame for most cookbook publishing. When her publisher demanded 100 recipes, Coleman didn’t balk, despite being unsure if she had enough recipes to fulfill a cookbook’s requirement.

“I started with a list of recipes that I wanted to create for the book. I made a list of 125 recipes that I thought that I could make. Now, some of them I had already made, because I had been experimenting with aquafaba. I spent from around April or May to until the first of October – which was when my manuscript was due.”

Coleman laughs, recalling what she calls an “intensive process,” where she was in the kitchen every day with her experiments. She created new recipes, made note of what worked, and threw away her failed attempts at dairy-free, eggless pastry.

Where some cookbook authors would cringe at the thought of making a mistake under such a tight deadline, Coleman is philosophical about her process. “I think the number one thing that I learned from this experience is – and I know this sounds a bit weird – but failure is really your best friend.”

Coleman illustrates that bold statement with one of her biggest challenges: The vegan macaron. Her love of the French pastry made her desperate to have an egg-free version for her cookbook. However, even the traditional recipe made with egg eluded her, even after a course on the subject. “It was literally the hardest recipe I have ever tried to make in my entire life…the main thing that I had learned from that class was that macarons are really hard to make and that I should just buy them in a store.”

Despite the many hurdles her vegan macaron presented, she persisted. “What I did was, every time I made another batch of macarons, I would try something just a little bit different, or I would adjust something a little bit in some way, until I finally got it to the place where I finally figured out how to do it. But it took a lot of practice, and a lot of tries, and a lot of batches of macarons being thrown in the garbage.”

Coleman adds, “I struggled a lot with making macarons, so that’s a recipe I’m really proud of.”

She urges bakers to put aside their fears of failure or misconceptions about aquafaba to really play in the kitchen without prejudice. “A lot of people are afraid of it because they think it’s going to make them gassy. Another one of the things that people say, is that they’re concerned that it’s going to give their baked goods a ‘beany’ taste, and that has not been an experience of mine at all.”

Coleman’s tips in working with aquafaba

A tablespoon of aquafaba is roughly equivalent to an egg
“With aquafaba, you’re only using a very small amount of it in your baking. You’ll only use a couple of tablespoons, or maybe a quarter of a cup in a lot of your baking. So, just a small amount in your entire recipe.”

There’s little to no “beany” taste in aquafaba
“I think part of that is the reason because you’re using really small quantities of it, especially in sweet dishes, you’re often covering it up. If there is any beany taste, you’re covering it up with things like vanilla, or chocolate.”

The secret ingredient for fluffier vegan meringues and mousses
“I either use cream of tartar or xantham gum. Xantham gum is a really great stabilizer, if you need extra stability on your meringue, use xantham gum.”

Keep an open mind
“Literally, every time I make aquafaba, it’s like a miracle, every time.”