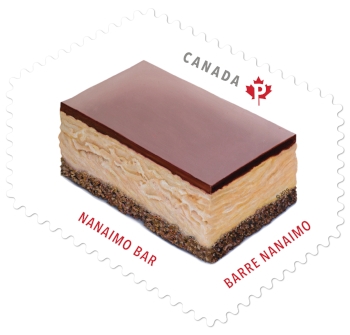 Canada Post launched a series of postal stamps that depict the national dessert from each of the provinces, but many in B.C. feel the image representing B.C.’s iconic Nanaimo Bar is “wrong.”

Behind many sweet treats is lore about Canada’s history, such as a pie made from the berries that once helped Indigenous communities survive long prairie winters to the tarte au sucre that reminded colonists in New France of their former homeland.

However, Canada Post’s depiction of the (traditionally) vanilla custard-filled Nanaimo bars has bakers and British Columbia locals scratching their heads. The traditional yellowish filling appears brown, as though it were a chocolate cream, and the chocolate crust appears to be too thin.

Even B.C.’s politicians suspect that their provincial treat is misrepresented. “That is definitely NOT a Nanaimo bar,” tweeted Port Coquitlam MLA and B.C. Solicitor General Mike Farnworth, while Coquitlam-Maillardville MLA and B.C. Housing Minister Selina Robinson insinuated that the illustrator, Mary Ellen Johnson, was “an artist who has never eaten one.”

The Permanent domestic-rate stamps, designed by Subplot of Vancouver, illustrated by Mary Ellen Johnson and printed by Canadian Bank Note, are available in booklets of 10.

A souvenir sheet and a souvenir sheet Official First Day Cover, cancelled in two of the desserts’ namesake cities, Nanaimo and Saskatoon, are also available for purchase at your local post office or www.canadapost.ca/shop.