New flavours, regulations, industry shifts … what to expect in the new year 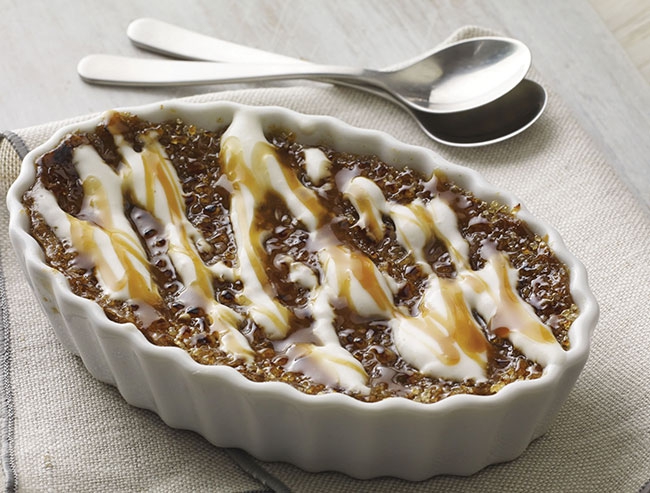 Anytime the calendar flips over to a new year, it’s a time for forecasting what’s in store. Bakers Journal identified four trends to watch in 2015, ranging from broader subjects like new flavours to industry-specific debates such as the proliferation of frozen products. In her Final Proof column on page 102, Stephanie Ortenzi also takes a look at some hot topics for 2015, including important economic indicators, the coming chocolate shortage, and shifting retail demographics. Also, Diane Chiasson, in her Concepts for Success column on page 14, presents an overview of product marketing trends you’ll want to be mindful of this year.

Countering the convenience trend, Flavour Worth the Wait shows increased interest in slow-cooked global dishes. The eighth trend, Umami Vegetables, demonstrates a widening knowledge and appreciation for the most recently discovered taste category.

The complete forecast, as well as recipes, is at www.mccormick.com.

Participation in the program is available at two levels: a commitment not to do any advertising that is targeted “primarily” to children under 12 and a commitment to only advertise “better-for-you” products.

Exactly what that means has now been outlined in the new nutrition criteria.

“Some of the examples are a cap on calories per serving, a cap on the calories in saturated fat,” says Carol Culhane of International Food Focus, adding that calories, saturated fat, sodium and sugar are where the limits apply.

Some of the biggest companies have already signed up: Coca Cola, Hershey Canada, Weston Bakeries and Kraft Canada. While participation is voluntary, Culhane says everyone in the food industry may want to pay attention to avoid being called out.

“It might be prudent to become familiar with whatever nutritional criteria these companies must adhere to before they advertise electronically,” she adds, “and then ask yourself, do you have products which are or are not compliant?”

While the new standards don’t come into effect until Dec. 31, 2015, Culhane believes many stakeholders will start complying ahead of the deadline.

“I do not expect to see two standards. I expect to see this become the standard — uniform throughout all of the Canadian marketplace,” says Culhane, adding that people have been complaining about inappropriate advertising to children for years. “Everybody has somebody to blame when it comes to obesity.”

How effective the new standards will be remains to be seen.

Industry Shifts
A growing trend at in-store bakeries is the increased use of frozen products — whether par-baked, pre-proofed and unbaked, or fully baked. Advantages for retailers are obvious — consistent-quality, freshly baked products that can be made by staff at a lower skill level.

“Consumer pressure is forcing the manufacturers to improve,” says Gary Humpreys, chairman of the British Columbia Chapter of the BAC. “[Consumers] want a cleaner label and the product quality just gets better and better.”

Martin Barnett, a BAC director at the national and provincial level, as well as program chair and instructor at Vancouver Island University, says that while he embraces the whole of the baking industry and sits on the board with manufacturers, personally, he has serious concerns about the increased use of bake-off bread.

“It is all about making money, it is all about convenience, it is taking jobs away from people and it is making bread in highly mechanized factories,” he says.

An overriding concern — and one Barnett feels may have the power to sway thinking publically and within the industry — is the carbon footprint made by shipping and storing frozen product.

“Do you want to support an industry that is using so much refrigeration and refrigerated transportation? Then in order for this product to work you have to have freezers and refrigeration on the vendor end. And do we want to increase our fossil fuel to produce bread that is made 3,000 miles away? Or do we want to encourage local bakers and support them?”

However, even with the negatives, the overall picture isn’t entirely bad.

“On the plus side, there is a resurgence in artisan bakers and as long as that dream is kept alive and as long as people think it is important to have organic, slow-fermented, non-chemicalized, freshly baked products — and I think they do — that it is a good thing,” says Barnett, adding that he estimates artisan breads to be about 10 per cent of the market.

“Our industry is changing on the one hand in that we are opening more boxes, and on the other, because of all the creativity of these entrepreneurs who are doing such a great job,” he says, adding that everyone in the industry is fitting their niche and he applauds them all.

“If a magasin in France sells pre-made bakery goods, they are not allowed to call themselves a boulangerie,” says Barnett. “To be a boulangerie, you have to make products on the premises with certified bakers. I think we should embrace that in Canada.”

Snackification of Breakfast
According to Julian Mellentin, owner and editor of New Nutrition Business, breakfast has been reinvented — as a snack.

In his 75-page report, “The Snackification of Breakfast: How changing consumer habits are creating new opportunities,” Mellentin states that, “Breakfast has become one of the most fought-over battlegrounds in food and health, a battle fuelled by consumers’ need for easy and quick meals in the morning.”

One of the most compelling pieces of evidence in the report is that in the year to October 2014, sales of breakfast cereals in the United States fell by five per cent. Of the $300 million that this represents, $70 million went to one brand — Belvita breakfast biscuits.

“The rest,” says Mellentin, “is going to a host of small brands, and it’s a similar story in other markets.”

“When Kellogg’s built that plant in the ’80s, it was North American state of the art. Now here we are 30 years later, and it’s closing because of changing consumer preferences,” she says, adding that entrepreneurs in the baking industry would probably see this as an opportunity.

That’s an opinion Mellentin shares. According to his report, Belvita’s success — as well as that of Up and Go, a cereal beverage from Australia, and Quaker’s Oat So Simple — is an indication of the strength of the on-the-go breakfasting and opens up possibilities for others in the food industry.

To be successful within the trend, Mellentin says the product must meet five factors: satisfaction, convenience, sustained energy, deliciousness and healthfulness or a perceived “halo of health.”

The term “halo of health” is more about perception than it is about nutrition. Belvita, Mellentin notes, is 30 per cent sugar, but because it has an approved health claim that it is a source of sustained energy, consumers ignore the sugar and give themselves permission to indulge.

Key product trends identified in the report include the rise of protein, perception of “good grains versus bad grains,” and dairy plus grains.

Meanwhile, with health a growing concern — and changes to Advertising Standards Canada — Culhane suggests developing products that also meet the nutrition criteria for children under 12.

“Your strategy must always be to create change before someone else does,” advises Mellentin. “That means companies must be willing to embrace risk and take more new ideas to the market, sooner.”

Now, there’s something to snack on.