New Ways to Bake with Cannabis 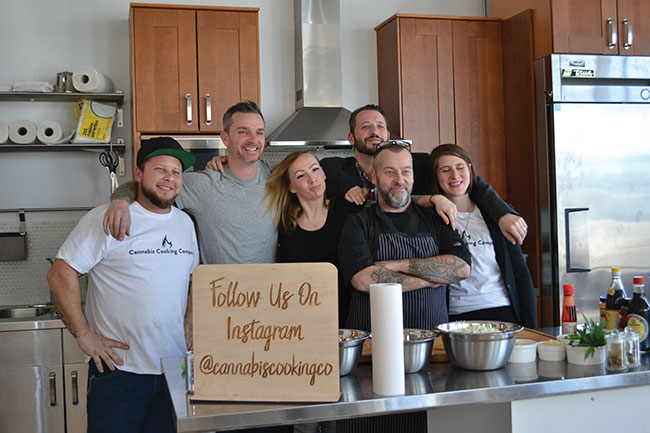 The food industry was abuzz in the lead up to the legalization of cannabis in Canada. Professionals, both users and non-users alike started to contemplate new products to satisfy customer curiosity and to gain a competitive edge.

Government laws restricting how companies produce and sell edible cannabis products and the costs involved have slowed many, if not halted altogether. It isn’t surprising that consumers have decided to start making their own.

In summer of 2018, Vanessa Labrecque, an avid baker and her boyfriend Joshua Tuck, a cannabis grower for 28 years, were watching television together, when in the middle of a cooking show they came up with a business plan. What about opening a cooking school based on making cannabis products?

Labrecque had long been adding infused cannabis into her homemade chocolate brownie recipes. “I was using the old-fashioned method with a double boiler, which had to be tended for a period of up to four hours,” she remembers.

Once she perfected the brownie recipe, she needed to decrease the preparation time in order teach classes that did not take a full day. Enter the Magical Butter Machine reducing the infusion time of the cannabis— into a wide variety of fats such as vegetable oil, olive oil, coconut oil or cream– down to just one hour.

And then very quickly, in October of the same year, the couple opened The Cannabis Cooking Company, in Toronto, Ontario, located in a rented 1500 square foot food photography studio.

“We wanted proof of concept, without buying a place ourselves. Now, for every class we roll out our cooking school,” says Labrecque, referring to the 10 cooking counters on wheels, filled with all the equipment and utensils needed to allow 20 students to create. After class, the carts are neatly rolled out and packed away.

And what was the main thing students wanted to learn how to make? “Honestly, it was my chocolate brownies,” she exclaims, with a laugh.

Lebrecque feels the success of the cooking school is largely based on a lack of edible products legally available and the underground movement selling products containing uncontrolled amounts of cannabis. “We really need to teach people about micro-dosing in small increments of 2.5 milligrams. It’s about finding the right dosage for each individual person.”

Instructors help student make products that are baked in small portions instead of cut. “We can control the amount of cannabis in each, like brownies made in small muffin tins, breakfast muffins, mini cheesecakes, butter tarts or cake pops,” she says. “Instead of adding the infused cannabis into the whole batter, each piece gets an individual dose.”

Class names include Wake and Bake; Candy Making; Cannabis Cake Pops and even Donuts Glazed with Daze. Students of legal age arrive to class, after having purchased their own legal, unopened cannabis. Once the infusion is made, students use it for their creations. The rest is taken home in a well labelled, child-proof mason jar.

In the future, Lebrecque sees more advanced classes in the works. Once students have learned how to infuse the cannabis, they can bring their homemade infusion to class and focus on making more intricate recipes. Legally the school cannot pre-make the infusion and supply students with it. 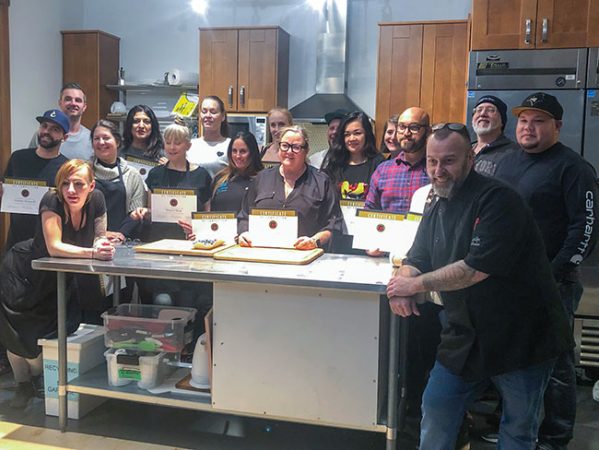 The Cannabis Cooking Company plans to add more advanced classes to its roster in the future.

Cannabis and Food Pairing
Tamara Lilien is a certified cannabis sommelier and chief information officer at The Cannabis Cooking Company. She starts her day by purchasing four or five different types of legal cannabis. Then, she does a taste and smell profile together with Brent Leitch, the company’s executive chef, to find foods that will complement both the primary and secondary notes of the cannabis.

“The general public may not have a good understanding of the variability that exists in scent profiles of different cultivars or strains of cannabis,” says Lilien. “This may be a result of the high prevalence of the terpene myrcene, the most commonly occurring terpene in cannabis, which smells earthy, musky and mildly fruity.” she says.

Terpenes are the organic compounds found in the plant kingdom that give each a unique smell. Over 100 different terpenes have been found in cannabis. “This varies based on both the genetic variety of cannabis, and the way the genes are expressed in the environment. The smells and tastes can be affected by the climate the plant was grown in, the geographical environment and the growth medium, for example in organic soil, with chemical fertilizers.” Lilien explains.

Heat and cooking time activate cannabis in a process called decarboxylation. There are two methods, passive, which preserves the terpenes and active which evaporates many of the terpenes. In both methods the cannabis is first ground or chopped.

With active decarboxylation the cannabis is baked in the oven at 240 F for 30 minutes. “This will activate the cannabinoids, like THC and CBD, at the expense of many of the terpenes evaporating,” Lilien points out.

For passive decarboxylation the cannabis is added directly into the infusion. “With this method, you can expect a loss in potency of about 60 per cent, but many of the natural flavours of cannabis are preserved because the terpenes do not evaporate,” she says. “Cultivars with citrus notes, like Jack Haze by 7Acres or Tangerine Dream by San Rafael are highly versatile as they complement a wide variety of recipes. If you were preparing a custard, you might select Pedro’s Sweet Sativa by Color Cannabis due to its sweet scent of berries. “

Baking quality products, that contain controlled amounts cannabis, keeping in mind the method of decarboxylation used and the countless flavour and smell profiles is a much more exacting and scientific approach than one may have originally thought.

The Cannabis Cooking Company is currently running 14 classes per month. It will be interesting to watch this little company on the forefront of something new and unexplored to see what they will come up with next. / BJ

Karen Barr writes about arts, culture and cuisine. She is a George Brown graduate and a Red Seal pastry chef.