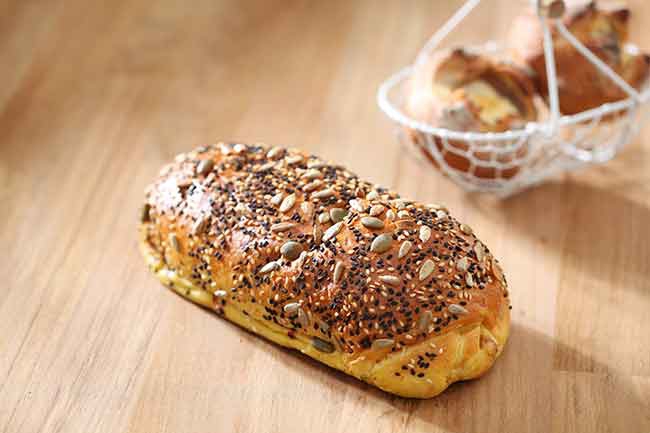 What would happen if you fused together a traditional Asian and European bakery? If you took the look of a French bread, but gave it the softness of an Asian bun? If you set-up the artistic feel of a European bakery, but operated it in the self-serve style of an Asian one? Or took a French baguette and dressed it with fish roe and wasabi?

Well, you’d have Bake Code, a Taiwan-based upscale bakery chain. And you’d be garnering yourself some media attention for bringing this unique concept to Canada, as three entrepreneurs have learned.

Thomas Wong, Kenton Chan and Vincent Lau are world travellers and food lovers who are keen to bring international concepts to Toronto. They are also the partners behind the recently opened Bake Code location at 4910 Yonge St.

The trio, who were all born in Toronto, have always been interested in doing business together, says Wong. Their business partnership sprouted about five years ago when Chan came across Chatime, a premium Asian teahouse, while taking his honeymoon in Australia. The friends opened a location at Bay and Dundas that became successful, then bought the master franchise rights for Ontario and began expansion in 2012. The partners now have 12 locations in greater Toronto. There are over 1,000 Chatime locations worldwide.

“I think consumers in Toronto showed they were really open to getting a premium tea concept in here. It was a bubble tea that was different than anything we’d found in Toronto market so far,” Wong says.

When the partners decided they wanted to get into the bakery business, they were looking for another opportunity to bring something unique to their hometown.

“When we think about Toronto or Ontario or Canadian consumers, they are very multicultural, very internationally focused and willing to try new things, but a lot of times we are one of the later markets to get things. Geographically things from Asia expand out to the west coast like California and Vancouver, and then kind of skip over Toronto and never make it here until many years later…We call ourselves importers of taste. When we think about we do, we like to find great tastes that are international and bring them to the Toronto market.”

Wong and Chan had been looking for a bakery concept for a while and had already searched the Japanese, Korean and U.S. markets by the time they stumbled across Bake Code in Taiwan. The franchise has the same parent company as Chatime, although that was coincidental.

“We really liked Bake Code because compared with other bakery concepts, the product variety was just incredible; it just blew us away.”

Over 100 and counting
The Bake Code brand has over 100 products in its range. The Toronto location brings out about 50 to 60 of those daily, and of those, five to 10 rotate depending on the day and production schedule, says Wong.

The bakery had its grand opening Sept. 17, and recipes and offerings are still being tweaked to see what will work best for the Toronto market. The bakers were testing a new brioche series in mid October that Wong plans to introduce.

The Euro-Asian fusion intention of the bakery translates into products that combine both techniques and flavours of the differing baking styles. A lot of the breads have a look and feel to them in keeping with the traditional French or European style. But inside, the flavours spin eastward and lychee, goji berries, and kimchee come into play. The texture is also reminiscent of the Asian style, with it being a softer chew.

Some of the early top sellers at Toronto’s Bake Code are the Gagnam Star, a soft bread stuffed with cream cheese and kimchee, and the Mentaiko baguette, which marries a traditional French baguette with fish roe and wasabi. There are different varieties of chocolate breads, like the Swiss chocolate boule. Breads like the red wine longan roll, multi-grain lychee roll and roasted espresso loaf are sure to fascinate the adventurous palate. Breads like the sailor’s special, whose ingredient list includes tuna, cream cheese, chicken seasoning, garlic and walnuts, demonstrate how many of these breads are easily snacks unto themselves, rather than accompaniments to a meal or a sandwich (although many lend themselves just as well to that too). All of Bake Code’s menu items have their ingredients listed underneath the product photos.

While breads are a big focus at Bake Code in Toronto, there are a number of cake and dessert options available. They carry the Japanese cheesecake that has become a big Toronto fad since Uncle Tetsu bakery opened its first Canadian location. Wong points to this as a prime example of how Toronto can end up with new things that are in fact pretty old. Japanese cheesecake is a craze in Toronto now, but Wong says this is something he had years ago overseas. Japanese cheesecake isn’t new by any stretch, but yet it feels very new in Toronto.

Bake Code do the popular mille crêpes cake, but also staples like a New York cheesecake. Seeming straightforward items like a lemon tart have unsuspecting ingredients like rum pop up when you dig deeper. Products at Bake Code always seem to have a delightful surprise layer to them.

The partners hired local bakers to learn the Bake Code recipes and techniques. There are 15 staff in the back of the house and 20 or so in the front, both working off a combination of full and part-time people. Products are made from scratch, and baked daily in small batches; all done by hand. The bakery will eventually employ the brand’s Bakery Timetable, which lets customers know exactly when specific products are coming out of the oven, but Wong says they need a little more time to get that up and running.

The parent company has provided assistance to the Canadian location in starting up. Experienced chefs called ‘the masters’ are sent from headquarters to train the local staff. In mid-October, the bakery had four helping, and that number was soon to be going down to two.

“We’ve had success with the team here,” Wong says. “They are learning quite well.”

The products are just one aspect of the Euro-Asian fusion that is thematic to Bake Code. The retail experience is a mix of services. A customer comes in, and grabs a tray and a pair of tongs. Above the bread display, there are small baskets containing samples. A nibble here, a nibble there, and decisions are made. The customer then brings the tray to the counter where it is packaged up by the staff. Desserts are kept in a refrigerated display that is not self-serve. The location also has a Chatime inside, and seats to sit and have a bite and drink. The 2,000 square foot store used to be a Second Cup, and the partners had it remodeled before moving in. The ceiling was raised, done in wood slats and given a wave shape. The overall feel is cozy contemporary.

Having been a partnership that expanded their first franchise to 12 locations, they have wasted no time in seeking a second spot for Bake Code. Construction is underway for a location in nearby Richmond Hill, Ont., at the Hillcrest Mall. Wong says heading west would be a natural expansion for the concept, but for now the focus is on the greater Toronto area.

“I truly feel this is one of those concepts that transcends demographics and culture. When you sit here, any walk of life and any background you can imagine come in and buy something totally counterintuitive. We have Persians who love the red bean round and Asians who are really big fans of our French style breads. I love to see that; that’s really what Toronto is about.”