Features Business and Operations Equipment
Back to Basics

What’s hot and fresh in mixers and ovens 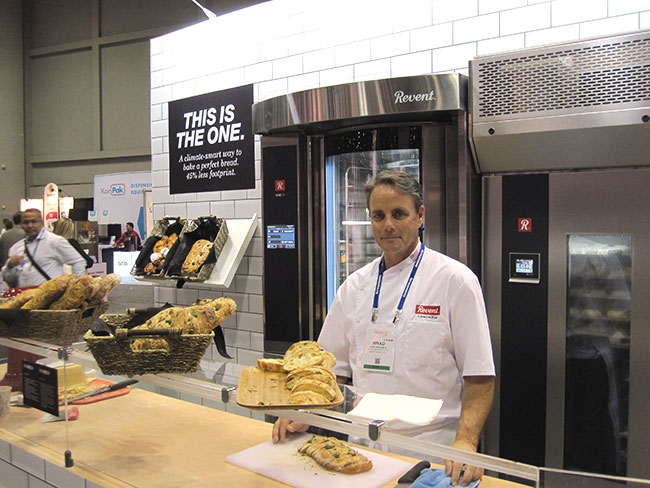 Revent’s Brad Winnaman demonstrated the company’s new ONE Series of ovens at the NAFEM show in February.

When’s the last time you upgraded your oven or mixer? Perhaps it’s been a while.

Even if it hasn’t, it’s never too soon to think about your goals for your bakery and how your equipment is going to help you achieve those objectives. And that means taking a look at two of the key components of your kitchen: ovens and mixers.

A successful commercial bakery, of course, needs many more pieces of equipment, but ovens and mixers are about as basic and fundamental as you can get. They also happen to represent costly capital expenditures so it’s important to make sure you’re getting exactly what you need – both today and in the future.

According to the 2016 Commercial Foodservice Market Forecast Report by the Manufacturers’ Agents Association for the Foodservice Industry (MAFSI), 25 per cent of foodservice operators in 2016 expected to increase their budget for equipment and supplies, while 62 per cent of operators planned to remain consistent – a 20 per cent jump from 2015.

A number of trends are driving change in the equipment sector, so if you are looking to invest funds in a new oven or mixer, you’ll also want to make sure you’re up to speed on the latest innovations. According to the MAFSI report cited above, energy efficiency and space savings are two of the most-desired attributes in new foodservice equipment.

HOT NEW DESIGN FOR OVENS
Sweden-based Revent is tackling trends head-on with its line of round ovens dubbed the One Series. These ovens feature a smaller baking chamber and sliding pocket door that reduces their footprint by 45 per cent. Revent’s ovens are used daily by bakeries in more than 100 countries, and it has a North American headquarters and production facility in New Jersey.

Revent’s ONE Series, which currently consists of two models – the ONE26 single-rack oven and ONE39 mini-rack oven – was showcased at the NAFEM show in Orlando, Fla., in February. Revent business development manager Brad Winnaman, a trained baker, put the ovens through their paces for attendees, turning out high-quality baguettes and rolls. Thanks to the ovens’ large, all-glass doors, the baking process could easily be viewed by people walking past the booth – that’s definitely by design, says Schumacher.

“You have the lighting and curved glass and everything that helps show off the product while you’re baking it. It fits with the trend toward more visual, experiential interactions with food. When you go into a bakery, you want to see what’s going on.”

Schumacher says that in 2008, when Revent first set about the task of redefining the bakery oven, the company wasn’t sure where it should focus its efforts. “The company was looking down the road to see how we could continue to be a market leader and separate ourselves from our competitors,” he says. “We thought, ‘You know, there’s not a lot you can do with a bakery oven nowadays.’ But then we thought maybe we could make the burners better and more efficient and add a bit of new technology – basically just touching it up around the edges, nothing ground-shaking.”

The key, Schumacher explains, was going out and talking to bakers. “We asked them, ‘What would you want if you could have a new oven?’ A few key points came back from just about everybody we talked to. One, make it smaller. They said, ‘Space is tight, our bakeries are cramped, and we’d love to see a smaller oven with greater efficiency. If you can get some greater efficiency, that’d be great because the cost of energy is going nowhere but up.’ Two, ergonomics. They said, ‘Can you make it easier to work with? We’re always burning our arms on the doors and stuff like that.

“And three, make it a showpiece. They said, ‘Add some theatricality to it, like in the deli they have the big rotisserie chicken ovens that let you see the flames. It provides some nice visual effects.’ So, after we got those core ideas, our team went to work. You see it about once in a generation a piece of food equipment is redesigned from the ground up and that’s really what the One Series represents.”

Revent’s ONE Series ovens aren’t just nice to look at, however: The sliding pocket door makes it much easier for bakers to navigate around the oven and load dough, in addition to offering additional benefits, Schumacher explains. “It allows you to move that oven closer to your customers, making it easier to engage with the customers. It also helps with not having that big door swing and that helps reduce the overall operating footprint by well over 40 per cent, depending on the oven and the door, which is huge – if I’m a baker, I can now roll my racks in from any direction. It doesn’t matter where my racks are coming from. And it certainly does minimize the risk of burns to the bakers. If you hang around bakers long enough, they like to show you their scars on their arms and elbows. So sliding the door out of the way dramatically reduces the opportunity for that to happen. The overall, look, feel and design of the oven, it’s a generational leap forward.”

Revent’s Brad Winnaman demonstrated the company’s new ONE Series of ovens at the NAFEM show in February.

MIXING IT UP
One of the biggest and most venerable names in mixers, Troy, Ohio-based Hobart – founded in 1897 – manufactures a wide range of heavy-duty mixers and mixer accessories for bakeries and pizzerias. Hobart is now part of ITW Food Equipment Group, a division of Illinois Tool Works, and manufactures and services equipment in Canada, the United States, Brazil, China, France, Germany, Italy, and the United Kingdom.

Hobart product line manager Julie Heinrichs says the trend toward food machines that take up less space is a design priority for the company.

“We’ve got customers that are requiring certain footprints within their facilities, so we are constantly reviewing our product portfolio and evaluating platform needs because space is such a constraint,” she says. “We are getting feedback that smaller-footprint mixers is something that people are asking for, so we want to make sure we have the right equipment sizes available.”

Heinrichs says this is particularly true of Hobart’s line of spiral mixers. Currently, Hobart offers a four spiral mixer models, ranging from 180 pounds to 350 pounds, but is working to develop a smaller model for specialty bakers that aren’t making large batches of product and don’t need a large device taking up valuable floor space.

“We are looking to launch a new 130-pound model,” she says, “and eventually our 180-pound model is going to take up the same platform. We try to save as much space as possible by putting in the larger horsepower motor, while the surrounding structure is as compact as we can keep it. Anyone who is looking to grow a business or needs versatility – the ability to do large batches and small batches – that’s one of the nicest attributes of the Hobart spiral mixer.”

Spiral mixers, Heinrichs adds, are also appealing because of how they function.

“The beauty of a spiral mixer is that the bowl moves around instead of just beating the dough against the side of the bowl,” she says. “Also, it uses a pulley system instead of gears, so it’s very quiet when it’s running and also easy to maintain. The pulleys causes less stress on the inside and leads to greater longevity for the mechanical components.”

“Basically we are taking and reducing the work required on the components inside because we’ve enhanced the mechanics behind it,” she says. “So, ultimately, we could reduce the motor’s horsepower but we’ve kept it equivalent to our competitors and we’ve added in double-pulley systems that give us the ability to overcome limitations on capacity while maintaining consistent mixing without lagging.”

Routine maintenance is also much easier and less frequent, Heinrichs claims, with a double-pulley system.

“Our double pulley system is much easier to maintain,” she says. “If something should stretch or go wrong after a long period of time, our data shows that it won’t require a lot of significant amount of maintenance. There isn’t a gear system, like with a planetary mixer, that’s constantly knocking around.

“Double-pulley systems also make for very quiet and very easy-running machines,” she adds. “The double-pulley system causes less stress on the components on the inside. That’s how we are preventing even less maintenance cost than the typical spiral mixer. When you add in the extra pulleys, you’re taking strain off your components. It’s like when you’re riding a bike, in one gear you’ll be pedaling really hard, and in a lower gear it’ll be easier. That’s what we’re doing by adding in a second set of pulleys. It makes the system work much easier. As a result of that, the interior components have longer longevity.”

BUDGET FOR NEW EQUIPMENT AND EQUIPMENT REPAIR
Shiny new ovens and mixers are nice, says Ross McMillan, co-owner and sales manager with RF Bakery Equipment in Coquitlam, B.C., but make sure you keep good records of when equipment was purchased and when it’s due for service.

“All equipment has wear parts, but generally speaking, dough makeup equipment has a useable lifespan of 20 to 25 years, give or take five years,” he says.

“Things that are more wear conscious, like ovens with heat exchangers, or a proof box, things that have parts that are critical to their operation that have a limited lifespan, the overall lifespan can be much shorter, somewhere closer to 10 years. For instance, maybe you’ve got a proofer and you are proofing sourdough bread every day, it’s producing a very corrosive vapor. Your proofer’s going to have a shorter lifespan. Or you’re using rack ovens 20 hours a day, seven days a week – they’re going to have a shorter lifespan, because you’re using them hard.”