Features Profiles
All in the family 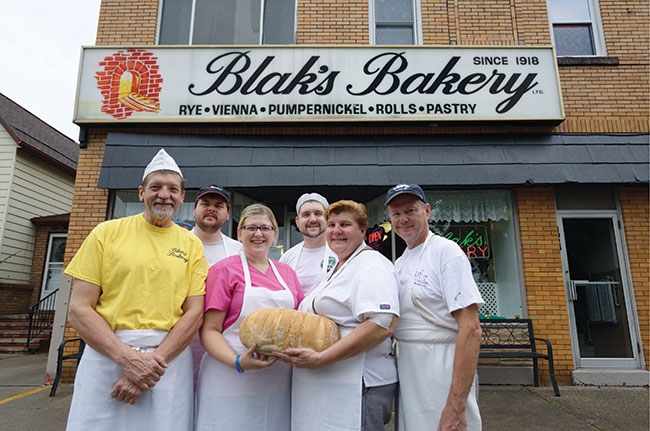 Blak’s Bakery and its staff today

It was all hands on deck this past February 28 at Blak’s Bakery. The regular staff of about 10 was bumped up to 40 that day, also known as Shrove Tuesday or Fat Tuesday.

Paczki is traditional Polish pastry, similar to a doughnut, filled with various flavours, such as raspberry, lemon, or custard. Blak’s Bakery is famous for Paczki and made about 30,000 this year—and sold out.

“This year, for the first time, we closed on the Wednesday after for recovery,” says Valarie Blak-Gill, who owns Blak’s Bakery with her brother Anthony (Tony) Peter Blak.

That would be the first time they’d done so in 100 years. Valarie and Tony are third-generation baker-owners of this Windsor landmark.

Blak’s Bakery was established in 1918 by their grandfather, Peter Blak Sr., a Polish immigrant who came to North America by way of Ellis Island in 1905. An experienced baker who had trained at the prestigious Hotel Bristol in Warsaw, Peter Sr. worked at a German bakery in Rochester, N.Y., before moving his family to Detroit where he worked at two bakeries, one on each side of the Canada-U.S. border.

In 1917, Peter Sr. bought a property with a house and room for a business in Windsor. Today’s Blak’s Bakery building is still the original, though there have been additions, most significantly in 1925, when a new section was added to the front of the bakery. The brick-hearth oven is also original: a Petersen oven from Chicago, believed to have been built by the oven company’s founder Edward Petersen. It was first fuelled by coke, later converted to coal, and finally to natural gas in the late 1960s.

“Back in the 60s, we were still burning coal in that oven,” Tony says. “I can remember – it was the worst job in the bakery – once a week, we had to clean out the remnants from the burnt up coals, called ‘clinkers.’ You had to pull the clinkers out of the fire pit and get rid of them and start a new fire, using wood to get the coals started again. Once the coals started, the stoker would automatically keep firing up the oven throughout the week.”

“My grandfather used to bake the bread and then load it into a handcart and go down the street,” Tony says, adding that a single loaf was one and a half pounds and a double loaf was three pounds. “He would fill his cart with an oven of bread and have it all sold by the time he went around the block.”

Eventually, a horse and wagon replaced the handcart, and by the early 1940s, they had a motorized truck.

A century of memories
To commemorate 100 years in 2018, the Blak family is reaching out to the community for stories. Tony recently had coffee with a 98-year-old woman who used to live across the street. Her father used to help out in the bakery – and also had a side business selling alcohol and beer.

“In a hundred years, a lot of things can happen,” Tony says. “My grandfather died in 1951, and I was born in 1955. One of my greatest disappointments is that I never got the chance to meet him.”

But the stories live on as family legends. Tony talks about when the stock market crashed in October 1929, and the price of flour dropped “like a waterfall.”

“My grandfather was contracting flour at the time from Robinhood Flour Mill, he had contracted the price, and it looked like the [bakery] business was going to be liquidated,” Tony says. “But he transferred the business over to my grandmother and became an employee, so when he got sued personally, he no longer owned the bakery, and he was able to dodge the bullet of the Depression.

Much more recently, Blak’s Bakery had a brush with fame when comedian Jerry Seinfeld was performing locally. Fans of his TV show may recall the episode “The Rye,” in which Seinfeld, after a failed attempt to negotiate with an elderly woman who had bought the last loaf of marble rye, steals it from her. When Seinfeld was in Windsor, Blak’s Bakery sent 20 loaves of marble rye to his dressing room. Seinfeld’s wife, philanthropist and cookbook author Jessica Seinfeld, posted a photo of the bread on Instagram. With over 250,000 followers, Jessica’s post drew much attention, including from MacLean’s magazine writer Aaron Wherry, who, while writing about the event, learned that Seinfeld said, “The Marble Rye was the best I ever had.”

“We were really proud of that,” Tony says.

Blak’s Bakery and its staff today

Changing with the times
When Peter Sr. arrived in North America, he brought recipes with him from the Hotel Bristol. Some of those recipes are still being used today, including Paczki, Warsaw rye bread, poppy seed strudel, and Paska, a specialty Easter and Christmas bread.

“But being in a Canadian environment, we have to make more than just Polish products,” Tony says.

And they do keep up with trends.

“One of our most popular items that we have recently brought out are KrowKnots,” Tony says. “We have had people go pretty crazy over our KrowKnots, especially in the summer time. We have a popup market location that we use, and it is probably the most popular product that we sell at the market.”

The business itself has also changed with each generation. When Peter Sr. retired, the business was passed to two of his sons, Victor and Peter, Tony and Valarie’s father.

“Our father [Peter] grew the business for 50 years, retiring in 1990, but keeping a watchful eye until 2015,” Valarie says, adding that her mother Elsie decorated the cakes and still teaches Valarie decorating tricks.

“It has always been a very family-oriented business,” Valarie says.

Tony says that while he loved his father, they didn’t always see eye to eye. After university, Tony followed a different career path – banking and real estate – but was always drawn to the bakery and worked there periodically over the years. Meanwhile, Valarie ran the bakery from 1990 until 2009, when Tony joined her. They took over ownership from their parents in 2012. The bakery has seen double-digit increases in sales since 2009.

“There have been ups and down, but we are very innovative,” Tony says.

Future plans for Blak’s Bakery are in the works, with the fourth generation of Blak’s being headed up by Tony and his son Peter. And so Blak’s Bakery continues into its second century, as strong as ever, as a family business.