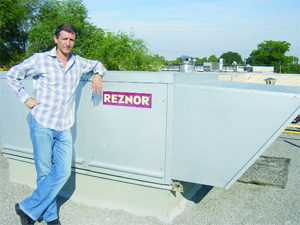 It began with a problem. Shasha Navazesh, owner of Toronto-based, organic bakery, ShaSha Bread Company, faced two concerns: airborne mold and spores, and improved shelf life for his bread. As an organic bakery with a strict practice of working with chemical-free products, using chemicals to solve the problems was out of the question.

“We are an organic and sourdough bakery, so bacteria and airborne fungus is a very big issue with us — contaminating our own cultures, and contaminating the finished product, which ends up with mold on the product in the bag,” explains Navazesh. “When the product comes out of the oven, it’s close to 500 F and there is no airborne fungus or bacteria inside or outside of any baked product. The contamination comes from the time that you take it out of the oven, cool it, slice it and bag it.”

After mulling it over for a while, Navazesh came up with the idea of creating an air filtration system with UV lighting that would stop airborne bacteria in its tracks by zapping it to oblivion.

“I work with bacteria and sourdough, and I do research extensively on bacteria and airborne fungus.  I thought it would be a great way of non-chemically extending my shelf life and having a cleaner environment,” he says.

First, Navazesh called Phillips Lighting to see about getting UV lighting suitable for a bakery. By “suitable,” he meant something, “with a plastic coating on it, because anything you use in a food plant has to be shatterproof. UV lighting was available, but none of it was shatterproof,” says Navazesh.

It took about a year, but Phillips eventually developed the lighting, called Navazesh back and suggested bringing L2B Environmental on board to actually develop the system. L2B is a Canadian manufacturer of environmental and air filtration systems, with plenty of experience manufacturing and working with UV systems (mostly in hospitals). From there, Van ‘A’ Engineering & Associates entered the picture, to create the design plans and help implement the project. After stopping production for about a day to install the unit, they had it up and running by November 2004.

Here’s how it works. During the day, a rectangular unit situated on the bakery roof brings outdoor air into the building through ductwork that has been fitted with the UV lighting modules. According to L2B Environmental, the UV lamps (Teflon-coated and germicidal) irradiate the air, killing 90 per cent of any airborne pathogens. The air then passes through a micron filter that traps any actual airborne particles, including mold spores. The UV light zaps the filter, this time killing 99 per cent of the trapped micro-organisms. The air, purified and clean, flows into the bakery. At night, the unit switches to a recycled air system, drawing the air from inside the bakery through the duct system and purifying it while the plant is empty. Navazesh had the unit wired into the bakery’s security system, so it’s up and running all the time, with no need to worry about having someone turn it on or off.

“If you don’t use it properly, then it defeats the purpose of having it, so I thought I should make it fully automated, interconnected, and interfaced with my security system.”

The unit’s filters (which cost about $12 each) need to be replaced one to two times a month, and the UV lights (costing a couple of hundred dollars each) should be replaced every couple of years. ShaSha Bread’s unit is suitable for a 10,000-square-foot space, and the installation cost was in the $40,000 range. A steep price, but one that Navazesh says has been more than worth it.

Although he doesn’t have any hard scientific data, in the two years the unit has been running, Navazesh says the shelf life of his bread has been lengthened by a day, his staff has cleaner air to breathe, resulting in fewer sick days and less concern over flour dust exposure, and steam cleaning of the bread storing area has been reduced from every day to two or three times a week. And since installing the unit, Navazesh says he hasn’t had a single batch of contaminated sourdough, something that used to happen at least a couple of times a year (which meant having to toss the batch and grow it all over again with the sourdough isolate Navazesh keeps in a secure location).

The company’s bread slicer has also been fitted with a similar (but much smaller) UV filtration unit to doubly ensure the purity of the air being pushed in with the bread when it’s bagged. Overall, Navazesh says he’s thrilled with the results and that the cost of the unit has been worth it.

“I think it was a great investment for ShaSha Bread in two aspects: a clean environment for the finished product and clean air for my staff. Those were the two biggest issues for me.”