Features Profiles
A “dandy” use of flavour 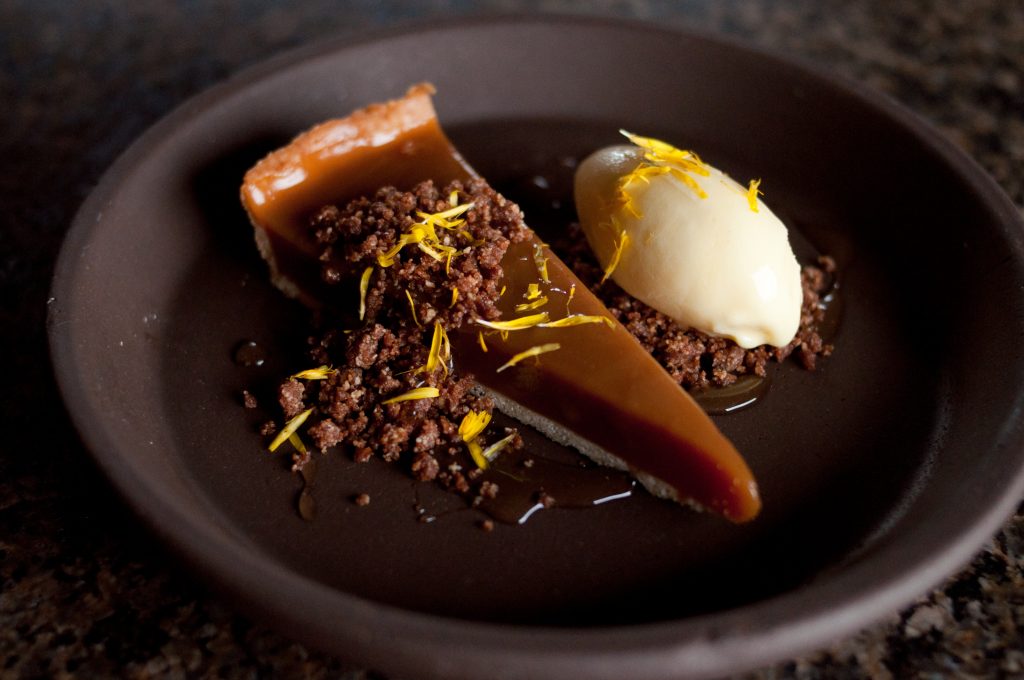 Pastry Chef Charley Scruggs of Terra restaurant in South Carolina, USA, sees something in dandelions that most chefs overlook. Where fresh dandelion greens appear in salads or vegetable mixes, Chef Scruggs uses the dandelion heads and not the leaves; the petals are garnish and the heads are distilled into a bright gold syrup.

“Dandelions are either super-bitter, or if you pick it at the right time, it’s actually not very bitter at all, like young arugula, almost. You have to pick it while it’s very young. We harvested it next to an organic farm in town, or in our own home gardens. What I started doing with the tops, we’d use the petals as garnish, but I’ve always wanted to find a way to make the oils from the petals shine a bit more.”

Scruggs started getting into foraging about two and a half years ago, when he worked in a Columbia, S.C., restaurant called Tallulah. When he moved to Terra, Scruggs decided to keep the practice going, on a smaller scale with his own twist.

“A technique I’ve used with other wild flowers, where you take the dandelion heads themselves, and you simmer them in water with a little bit of apple slices for the pectin, a little bit of lemon juice and you really just make a tea. Bring it to a boil, and let it steep for 30 minutes: What happens is that all the oils get pulled out from the petals, and it turns that tea bright yellow, which is really cool.”

Scruggs adds that it was the colour of his infusion that inspired his desserts and even sparked some interest with the bartenders at Terre, where he is currently pastry chef.

“What I wound up doing was making a simple syrup from that tea and depending on what I would use it for, and what the bar would use it for, you could cook it longer. I kind of cook it a bit thicker, almost like maple syrup and drizzle it over things, but you could also use it as a simple syrup for cocktails or whatever and you don’t get a lot of bitterness you associate with dandelions.” Scruggs adds that the petals by themselves have an earthy, flower-like flavour, doesn’t have the bitter punch of the greens usually found in a salad mix.

When foraging, Scruggs strongly advises chefs to find out how the soil was treated; Even if the land the dandelions grow on was not sprayed with pesticides or weed-killers, there might be run-off from land that had been sprayed. He also cautions foragers to ask for permission to approach the land first, even though the dandelion is considered a weed. This presents an opportunity for cost-effective ingredient sourcing for chefs who want local produce on a tight budget.

“The farms that do grow it for salads won’t let it grow to the point where it becomes a flower; That’s where all the bitterness starts. But if there’s a lot that they aren’t using – it’s a very invasive weed – they’ll either burn it or clear out the land entirely. If you can catch them in time, or if you have an agreement with them, they’ll give you a heads up: ‘Hey, we’re about to clear out the weeds, so help yourself.’”

Scruggs adds that when it comes to foraged ingredients, he tries to keep them as fresh as possible. “I don’t do too much to it. Especially when it comes down to the greens. When you start cooking them, or altering them too much, you’re going to lose a lot of the nuances in flavour when it comes to that specific green and it starts tasting like any other sautéed green.

“For me, foraging is kind of a hobby that I try to bring into my career at the moment. There’s a lot to learn; there’s definitely some chef friends of mine who are more well-versed in it than I am, so they know what to look for,” states Scruggs. “I’m still kind of learning and getting into it… I think in modern times we’ve lost a lot of the connection that we have with what grows around us. Even if you don’t use it, it’s kind of fun, to be aware of what is actually growing in your yard. A lot of it is edible – a lot of people don’t realize that. It just depends on when you pick it, how much you use in a mixture or how you’re going to process it.”

The syrup can last “months” if refrigerated, and Scruggs adds that it can even be frozen though he warns that it might crystallize. He suggests processing it in a canner to make it shelf-stable for easier storage.

Currently, Scruggs favourite use for his summery-tasting syrup is his English-style toffee tart with a little bit of honey in the tart mixture itself and then its garnished with a crumb that has cocoa, almond flour, lime zest. “The goats milk ice cream kind of helps balance and brighten everything up,” explains Scruggs.

“One thing the owner [Mike Davis] and I have been working on is trying to use the local produce in a lot of the new ingredients that we are able to get from the region with new farmers coming in, and giving us new products and still trying to use it in a way that’s approachable and familiar to people in the area. It probably won’t change drastically, but there will be a stronger focus on the produce we’ll be able to get at the time, and try to match the menu that Mike has for the rest of the menu.”

The inventive pastry chef believes that interest in foraging is growing. He’s doing what he can to bring something different to the region, without alienating long-time residents.  “The trend that we’re starting to see state-wide, and I definitely see it in Columbia, people are interested in trying new flavours, they’re interested in trying new techniques, and different cuisines that you wouldn’t usually see…dishes that have several different elements that they are not used to, is something that the world has seen for a while, but I think Columbia and South Carolina are starting to see, and I think they’re actually embracing it.”

Scruggs laughs, and says, “The funny thing about foraging, it’s not an altogether foreign concept. From the perspective of going to a restaurant and having that served to you, that’s a little different, but when you talk to people – especially the older generations – it’s something that they’ve already done but they haven’t thought about it. They don’t see it so much as a “trend” as it is in the culinary world. For them, it was just life. It’s not something that they would expect to see in a restaurant, but when it’s done well, it’s something that clients are interested in trying.”