Features Health and Safety Technical
A Career to Die For

Working in a bakery is more dangerous than you might think, just ask Scott Dion, who suffers from Baker’s Asthma. 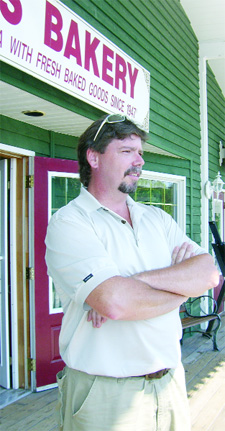 To look at him, you couldn’t tell that Scott Dion has health issues. We meet outside Don’s Bakery in Bala, Ontario, on a brilliant, sunny day in July. He’s wearing golf shirt and shorts, sports a brown goatee (ever so slightly speckled with grey) covering the lower part of a tanned face, his eyes crinkle at the corners with the onset of a ready smile or laugh, and sunglasses are pushed up onto his head. Two earrings glint from his left ear. His looks belie his 44 years.

Outside the walls of a bakery, Dion breathes easily. Inside is a different story. Scott Dion has occupational asthma. His form of the illness is commonly known as baker’s asthma or even baker’s lung, provoked and made worse by exposure to certain allergens that are common in bakeries, including wheat, rye, barley, and soy flours, yeast, eggs, sesame seeds, nuts, molds, flax seed – the list is lengthy.

Canadian statistics suggest approximately 10 per cent of bakers suffer from occupational asthma, although it’s widely believed that may be an underestimation, says Dr. Susan Tarlo, a University of Toronto professor and practising respiratory physician who specializes in treating environmental and occupational lung diseases, especially occupational asthma.

“It may be under-recognized for many reasons: workers may be afraid to admit to having symptoms that seem related to their work, as they may fear losing their job; doctors may not ask their patients with asthma about their job and any relation in timing of their symptoms to work, and therefore, may not suspect the diagnosis and investigate it; some workers with baker’s asthma may recognize it themselves and leave their job soon after their asthma starts, and then their symptoms may clear and not be investigated or diagnosed. Finally, not all patients with baker’s asthma submit claims to compensation systems – either they may be self-employed or, for other reasons, may not be eligible to submit a claim, or they may not wish to file a claim, and therefore, the proportion of baker’s asthma reflected by workers’ compensation reviews may be an underestimate. This is likely for all occupational asthma, but the underestimate might be greater for bakers with small family businesses.”

Dion started working in a small independent bakery in his home town of Midland, Ontario, when he was 13, helping out after school and on weekends. Once he graduated from high school, he eventually completed courses and an apprenticeship at George Brown College. His baking career has ranged from the local European bakery where he got his start, to in-store bakeries, a bun shop, and lastly, Don’s Bakery in Bala, a seasonal scratch bakery that has been on the go since the late ’40s.

For Dion, the baker’s asthma symptoms developed gradually, starting with watery eyes and an itchy nose, and would disappear when he left the bakery.

His first, real “attack” occurred when he was 23.

“I was preparing a rye sourdough and all of a sudden I just couldn’t breathe,” he remembers. “Your chest just keeps getting tighter and tighter, and it’s hard to get air. You know you have to inhale soon, but you feel like you haven’t exhaled enough yet.”
Dion wound up at the hospital, where he was given a treatment of ventolin (common for asthma sufferers) and placed on an oxygen mask to help open up his airways.

“No one ever said the word ‘asthma’ to me, so as soon as it cleared up, they took the mask off, I told them I felt better and I went back to work.”

He later went to see his family doctor, who suggested it was some sort of “environmental” sensitivity and gave him an inhaler to help deal with the symptoms should they arise again.

“When I wasn’t in the bakery, if I was away for a week or two on vacation, I felt great, I didn’t have any symptoms. And even working in the bakery, I would sometimes go for long periods of time where I felt good, though I might occasionally sneeze or get watery eyes.”

But it never occurred to Dion (or his doctor) that something in his workplace might be causing those symptoms.

“I mentioned to my doctor a few times that when I went to work this would happen, he sent me for allergy testing. It was determined that I was allergic to trees native to Southeast Asia. It wasn’t even considered that it might be flour or something at work. I was always told it was house dust, mites, trees, etc.”

After a few stints away from the bakery (working in telecommunications and managing a bar), the mixing bowl called to him, and Dion returned again to the bakery world. Upon his return, so too, would come the watery eyes, sneezing and tight chest.

How is it Dion didn’t see the connection between baking and his symptoms?

“I grew up believing you don’t tell your doctor what’s wrong with you; they’re supposed to diagnose you. I really relied on my doctor. I would go into his office positive that something in the bakery was setting me off and by the time I left he’d have convinced me it was outside, environmental stuff,” says Dion. “I also got to the point where I’d tell myself that I’m really good at this, why would I want to look for something else?”

Finally, after Dion had a really bad attack when his eyes swelled up so much he could hardly drive home, Dion’s wife had had enough.

This was approximately a year and a half ago, after almost 20 years of watery eyes, sneezing and struggling to breathe – almost two decades after the first attack that took him to the hospital. Dion knew it was time to take things into his own hands. He did more Internet research on the topic and e-mailed a Montreal doctor who gave him Dr. Tarlo’s name. After getting a referral to see her through his own doctor, Dion also made an appointment with the Occupational Health Clinics for Ontario Workers (OHCOW), a team of health professionals who offer a range of occupational health services [the OHCOW was formed by the Ontario Federation of Labour and is funded by the Workplace Safety and Insurance Board (WSIB)]. It was a doctor with the OHCOW who first diagnosed Dion with baker’s asthma.

“An objective diagnosis involves showing objective evidence of asthma on breathing tests, a positive allergy skin test to a bakery substance and also showing changes on breathing tests and symptoms off work as compared with at work periods,” explains Dr. Tarlo.

In the meantime, Dion continued working at Don’s bakery, wearing a small particle mask (supplied by bakery owner Ross Davidson, who Dion said was very supportive) in an attempt to prevent the onset of asthma symptoms. It seemed to help somewhat, though not completely, and Dion says the mask was hot and uncomfortable to wear.

He continued working until Dr. Tarlo conducted a food-specific prick test on his arm, looking for an allergic reaction to such things as barley, rye, wheat flour, and flax, to name just a few.

“My reaction to flax and rye was the worst – the pricked area really started to swell up.”

That’s when Dr. Tarlo gave him the bad news: no more bakery work.

“The best outcome for the asthma is to prevent further exposure to whatever has caused it,” says Tarlo. “If a baker has
asthma caused by the work exposure (for example, to wheat, rye, other flours, powdered milk or egg, or enzymes), then the best management is to stop being exposed to the specific agent causing the allergic response. Sometimes, this can be achieved by changing the product used in the area, sometimes, the baker has to move to a different area where it is not in the air; and sometimes, the baker needs to change jobs – within the same workplace or in another workplace. If a baker has a claim accepted for occupational asthma by a workers’ compensation system then this may support them to look for another job, if needed, or in some cases, they may be offered retraining to help them find other work without the same exposure.”

If left undiagnosed, just how serious can the asthma become?

“If the diagnosis is made after several years of symptoms, or if the worker stays exposed to the cause, then asthma can become severe and persistent, and even death has been reported, although very rarely,” says Tarlo.

So what about Dion? He misses baking, misses the creativity and the challenges that come along with it. But he’s not willing to trade off his health for the sake of work he has come to love. Dion has essentially no symptoms when he’s not in the bakery and so he stays away. When we met in July, he was awaiting a cheque from the WSIB. He was also hoping to be offered job retraining, although in what area of work he wasn’t sure.

His advice for other bakers who think they might be suffering from occupational asthma? Take your health into your own hands, and be proactive.

“And if you’re not getting the results you need from your family doctor,” advises Dion, “get a second opinion.”

For a PDF about baker’s asthma that you can print and post in your workplace, go to the following link: www.iapa.on.ca/resources/resources_downloads.asp, click on “Occupational Diseases” under “Workplace Health and Well-Being.”