"It's nothing gourmet and grand, it's a rustic chocolate chip cookie. Each cookie is the same weight, but they all look different. No two cookies looks the same, which is part of the branding, as well. I want the shop to feel like you mum, your father, or your grandmother or grandfather just made them in the kitchen.” — Craig Pike 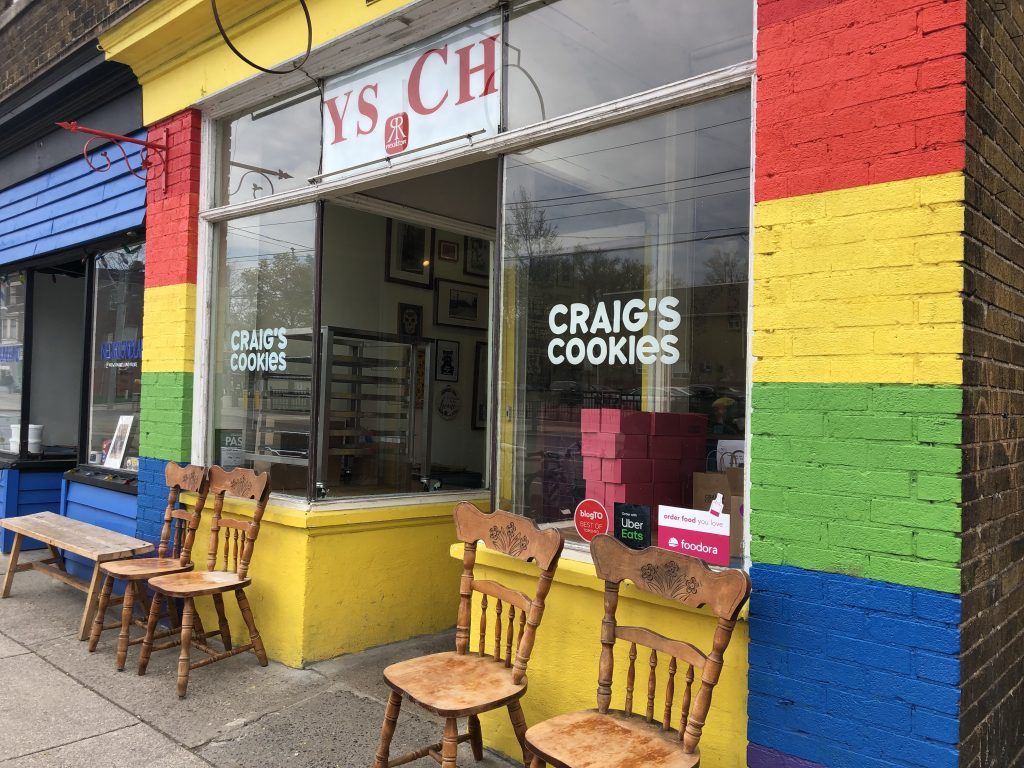 In Parkdale, (a borough in the west end of Toronto) lies is a small but homey little shop with a brightly coloured Pride rainbow façade reminiscent of the cheerful houses found on Jellybean Row in St. John’s, Newfoundland. Wooden kitchen chairs are lined up politely in front, inviting bypassers to take a seat, as the smell of caramelizing sugar and melting chocolate wafts out through the front door. 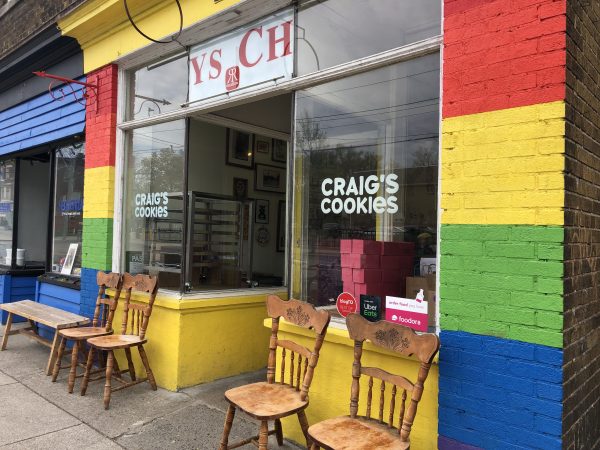 Craig’s Cookies had an interesting journey from a delivery service to a pop-up shop, and finally its current bricks-and-mortar location. The bright, east coast-style paint job on the front is no coincidence. The founder and owner, Craig Pike, hails from Newfoundland, and wanted to bring a touch of home to his adoptive city. “As far as new bakeries that open it’s always comes down to nostalgia or the tradition of baking, and your personal integrity as far as where you have personally come from. I feel [the shop] is a space where you can be yourself in.”

Working with the recipe he was taught by his mother, Craig’s Cookies is a playful take on the basic chocolate chip cookie. “We definitely believe in the quality of the cookie, so we do use the best ingredients possible, as far as our flour, and our chocolate chips. It’s a cookie that feels like your mum personally made it herself. So, it’s nothing gourmet and grand, it’s a rustic chocolate chip cookie. Each cookie is the same weight, but they all look different. No two cookies looks the same, which is part of the branding, as well.I want the shop to feel like you mum, your father, or your grandmother or grandfather or yourself just made them in the kitchen.” 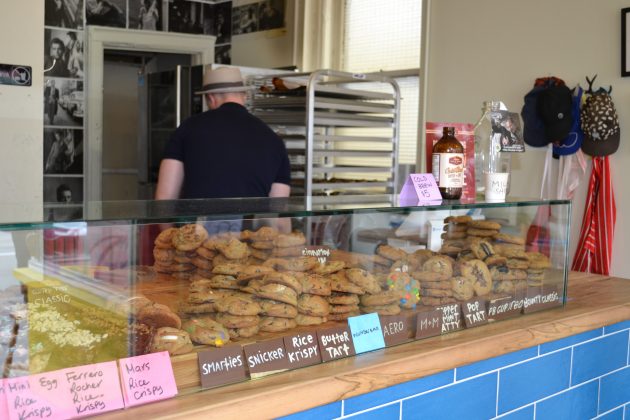 Pike didn’t originally see his career leading to a retail shop of cookies. Aside from his love of his hometown, he does enjoy a good cookie, and knows how one can bring delight to customers. Originally, the DORA-nominated actor, came to Toronto to study theater at George Brown College and like many actors, was a waiter in-between gigs. However, an unexpected turn of unemployment forced him to consider his options.

“I thought, ‘I need to pay rent, so I’ll start selling cookies.’ People really loved them when I brought them to parties, and pot-lucks when I was a teenager, and when I was in college. I went on Facebook and Instagram and said, ‘does anyone want to buy some cookies for 8 bucks a dozen?’” Pike offered bicycle delivery to sweeten the deal.

“I then went away, did some acting, and when I came back the Parkdale Flea Market invited me to come and sell my wares at the market there. I showed up with a bunch of cookies, and started selling my cookies at the market and people liked them. It was at that point there was just the classic chocolate chip cookies, (it’s my mom’s recipe.) Over the next two years I would do markets like the Parkdale Flea, the Bellwoods Flea and the Toronto Bakers Market. People just really liked them, and they bought more and more cookies each time I brought them to the market.”

Pike recounts how the biggest boost his business received was the moment he was approached by EnRoute Magazine, the online flight magazine sponsored by Air Canada. An EnRoute employee tasted one of Craig’s cookies at a party, and wanted to interview him for a cover story.

“This also opened our business up to a much wider range,” added Pike. “We went from delivering to people’s houses in Roncesvalles or High Park, to now Bay street quarters. At this point, it was still relatively small, and I was baking by myself.” Roughly three years ago, Williams Sonoma, approached him to come and do a pop-up shop in their Yorkdale Mall location, one afternoon.

“I used to wake up around 2:00 in the morning, and bake by myself and then not sleep, then go these markets. So, I showed up at Yorkdale mall, sold out within two hours, and then they asked me to come back. I said, ‘how about I bake on site?’ Because Williams Sonoma has the benefit of having a kitchen in the middle the store where they cook their own food. They said, ‘yeah, that’s a great idea!’ and I said, ‘the smell of baking cookies would bring more people in.’ So then next time I came – which was a couple of months later – I baked on site and baked fresh cookies. So, people were buying cookies fresh out of the oven. Out of that came a relationship where they invited me to do a six month pop up shop. so, I went into Williams Sonoma the start of October ’17, and was there for six months, five days a week.

This was Pike’s first foray into having a “brick-and-mortar” shop. “At that point, I was just taking orders over my email and bringing them over on my bike. So, from Wednesday to Sundays, I’d be there from 10 to 6, baking in two little toaster ovens. Twelve cookies every eight minutes, and between 10-6, it was just non-stop, people coming and buying cookies.”

Pike recalls vividly the day that his shop took on a new turn. One of his Instagram followers posed an image of a rental space that would be available for rent in January of 2018.

“I thought, the opportunity at Williams Sonoma meant that my clientele grew quite a bit. Why not try to open a brick-and-mortar shop? I’m pretty risky when it comes to business, and I think it might be out of ignorance, but I think also out of true belief that the zeitgeist of the cookies was all working out.”

He went to visit the space, and his landlord gave him an ultimatum of 24 hours to make a decision, and demanded first and last month’s rent. “At that point, I only had six thousand dollars in my bank account and first and last was $5500. So I gave him pretty much all the money I had, and I was standing in the middle of my little space in Parkdale where there was no floors, no plumbing, nothing. And no money. I thought, ‘what have I done?’

“As far as marketing is concerned I feel that the reason I had to go through Instagram and Facebook is that I had no experience, I’m not a trained baker,” adds Pike. “I had to use what free resources that were available to me. I also had a good eye for photography, but you don’t need anything special. I just used my iPhone, and took photos of the cookies on wooden boards and stuff. Whatever makes me feel “homey” is what I want to portray in any kind of image or marketing.”

Pike laughs as he recalled how he didn’t have enough money to put a floor down. He decided to use what resources he had to raise the funds: He turned to crowdsourcing to turn his dream into a reality. “BlogTO was incredibly supportive of my company, and they posted that I was doing an online fundraising campaign, and I was able to fundraise almost $10K from that. Someone who had seen that post from BlogTo and called me and I they lent me $25K.” This donor wasn’t an angel investor, but a lender who offered $25, 000 and a year to pay it back. “Somebody read the article, and they believed in my story,” says Pike. 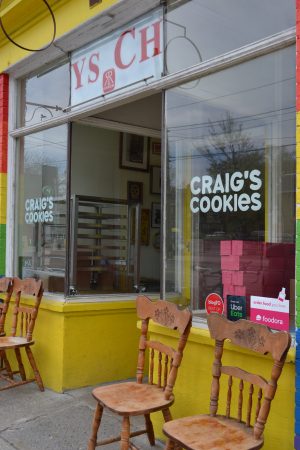 Going from the polished, high-fashion commercial kitchen of Yordale’s Williams-Sonoma to a rustic-looking location in Parkdale was a shift – but Pike made it work. “I feel that baked goods – especially cookies – are something that every culture has…like bread. From Naan bread to pita, everyone has a relationship with a baked good, and it’s usually linked with a family member that taught them. That’s what I want people to feel when they come to Craig’s Cookies, that they are coming to their family’s kitchen.”

“We opened on April 6th of 2018. Business has grown over 300 per cent in the last year. So, now we’ve got people in Washington or New York who have heard about the shop down there and they come to Toronto, and they say it’s on their ‘to do’ list. I feel one of the greatest accomplishments of the shop is not just the cookies, but also that it’s become a place to bring people in to Parkdale. Especially, we’re in the Western part of Parkdale, which is kind of a developing community in the neighbourhood.”

Craig’s Cookies is evolving, but where it’s going even Pike doesn’t know. “This is the last place I’ve ever thought that I would be. I never thought I would have my own shop. I never thought I’d have my own cookie company. So, it’s literally day-by-day. I’m seeing where the energy of the space goes, where of where our customers will be. There’s definitely room for expansion. So, yes, it’s all very specific to the community, if we do want to open another shop, possibly,” contemplates Pike.

“I’m in no rush for anything. I’ll just go day-by-day to see what doors present themselves to me, and saying ‘yes’ to every opportunity. There’s always an opportunity if you’re open to it.” /BJ